A Poem entitled "Bethlehem"by Joe Marmion, one of our recent pilgrims

Pictures taken in Bethlehem’s Chapel of the Angels
My favorite line in Joe’s poem, is the last line. 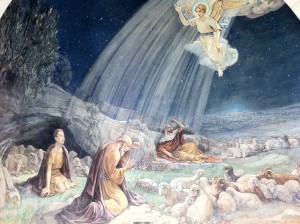 Remember that day
he took fresh straw
and swept the clods and dung away
to clear a place for his wife to lay?
She was the one with child he would not shame.
He could have left her without blame,
but stayed to fulfill a Father’s will.
The sheep had stayed out on the hill
so he could light a fire to fight the chill
and give some light and cut the smell
of manure and urine that stung the nose.
Can this be the place the Father chose,
the One who made the star that rose
in the East to herald the way?
Ignore what Herodians say,
at the end of the day,
what shepherds learned, wise men knew
this day foretold from Genesis through
all of Scripture, from Old to New. 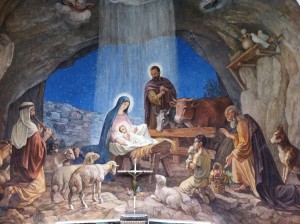 Each man came with what he had.
The shepherds with hearts of glad
tidings.  The wise men with packs
on camels and cloaks of fur.
To follow that star that had become their lure
they crossed deserts, rivers and mountains wild
in search of a king but found a child.
Not just a child but the Wunderkind
born of a virgin who had never sinned.
He and his wife in wonder start
but keep these events stored in their hearts.
The Wise Men brought caskets of incense and gold so pure,
gifts that priests and kings prefer.
So, rejoice and be glad
but do not forget the myrrh.