I Smell Like a Fish! Fishing with Andrew, Peter, James and John


Today is the Feast Day of the Apostle, St Andrew, brother of St. Peter. I wrote this in 2000 after a night of fishing with Jewish fishermen on the Sea of Galilee. Since today I am discussing St. Andrew with Drew Mariana of Relevant Radio, thought I would share this story with you again.

To see my run from Bethsaida along the shores of the Sea of Galilee, click HERE. Join us on a pilgrimage visit my site at www.CatholicConvert.com. 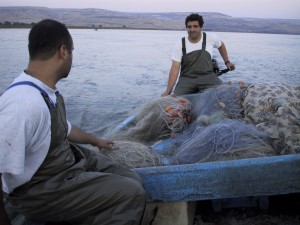 I smell of fish and I need a shower, but I’ll get to that in a minute.

The moon is still hanging over the the Sea of Galilee and the waves are gently rippling against the dock. The lights of Tiberias are twinkling in the distance and the silhouette of the small fishing boats are visible bobbing in the water. A gaggle of geese are swimming by honking with self-importance while the eastern sky is beginning to lighten. It is about 5:30 AM and I got up at 4:30 to drive around the lake to meet Shemi. 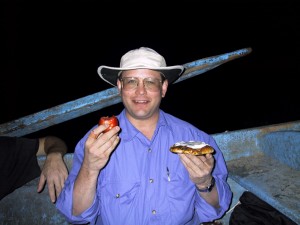 Over a cold Maccabees beer yesterday, my friend Shemi asked me to go out with him fishing last night but I was tired with a long day ahead of me today and thought it best to get some sleep, but I promised to go with him later. Shemi is a Jewish fisherman (you can see him in my Jesus and Peter DVD’s) who fishes all night out on the Sea of Galilee just like Peter, Andrew, James and John. He reminds me of Peter.

A couple years ago I spent the night out fishing with Shemi and his partner Udi but I got very seasick with the rocking of the boat. My job was to splash in the water and bang on the side of the boat to scare the fish into the net. Shemi asked me to meet him this morning so I could see his catch of fish and how high the water had risen here in En Gev since the last time I was here. It is 11 feet deeper now, a few inches below the full capacity of the sea before they open the dams to let some water out. 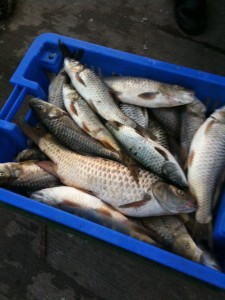 Yesterday Janet and I spent of day of discovery finding new things and enjoying the familiar. We found the old ruins of Magdala from which Mary Magdalen was named. We got video footage of the site though it is private property and fenced off, even with barbed wire. We found the Springs of the Apostles where Jesus and the apostles certainly rested and slaked their thirst as they traveled through the gorge under Mount Arbel as they traveled back and forth between Capernaum and Nazareth. Several Arab families were there filling jugs of water to take home. 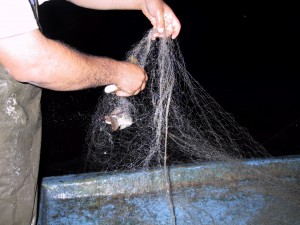 Other new sites we discovered were the stone marker commemorating the place Jesus healed the woman with the “issue of blood” and where the synagogue official Jairus requested healing for his 12 year old daughter (Lk 8:40-56) and the Domus Galileaea which is a beautiful new papal institute overlooking the sea which is almost finished.

It is used for seminarians to study the Holy Land and for pilgrims to visit. We also had to see how much difference 11 feet of water made at the Church of the Primacy of Peter just south of Capernaum and to say hello to our African priest friend there who said he had finished my book Upon this Rock and enjoyed it very much. Such a thing always makes an author’s day. 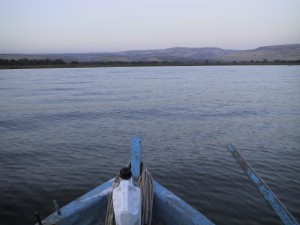 We ate dinner at our favorite restaurant here and talked for three hours with our friend who is the owner of the Aberge Shulamit Restaurant. She is somewhat of an atheist and very intelligent and thoughtful. She also told us the marvelous love story of how she met her husband in the Israeli Air Force in 1962 when she was only 17 years old. He died a few years ago and a picture I took of him still hangs in the entry of the restaurant. Please pray for her after our very delightful and probing discussion. I hope she takes my challenge to discover the mercy of the God who does exist and who loves her enough to have sent her Jewish Messiah 2000 years ago.

It is now an hour later and after helping Shemi unload, I smell like fish and I’m going to drive back to the Kibbutz for a shower!