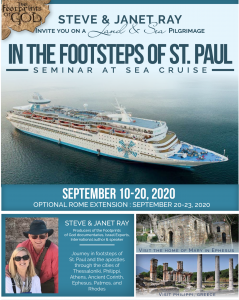 Register soon because this trip is very popular and there is already filling quickly. We only do this Mediterranean Cruise every two years. On this cruise we are bringing my son, one of my daughters and our eight oldest grandchildren. What a blast!

For an interactive map, a full itinerary of the 10 biblical sites we will visit and a lot more, click HERE or on the image to the right.

We have two of our favorite priests lined up and Mass every day at spectacular sites. Fr. James Conlon is one of my favorite homilists and pilgrimage priests. He is pastor of St. Francis of Assisi in Ann Arbor, Michigan. Fr. Chris Alar is a priest with the Marian Fathers of the Immaculate Conception with Fr. Michael Gaitley. 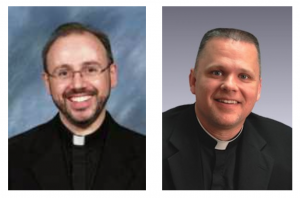 The pricing INCLUDES airfare and the daily biblical excursions ashore and meals – and ALL tips!

Steve & Janet Ray designed the detailed itinerary themselves to maximize biblical and Catholic learning and fun. The Ray’s are bringing 2 of their adult children with 8 of their wonderful home-schooled grandkids!

Remember that this is not just a pilgrimage and a cruise but also a “SEMINAR AT SEA.” We have several afternoons free on the ship. Iwill give his popular talk “The Life of St. Paul,” Fr. Conlon (one of my favorite homilists ever) will give talks as well. Fr. Chris is a leading expert on St. Maria Faustina and the Divine Mercy. He will be sharing much on this while we voyage the Seas! Steve will also be sharing at each of the biblical sites along the way. 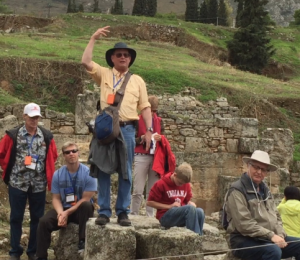 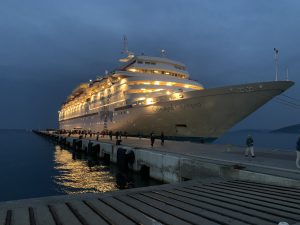 Explore 10 Biblical Sites in Greece and Ephesus with Steve & Janet Ray on their Mediterranean pilgrimage cruise and “Seminar at Sea” in the Footsteps of St. Paul

Arrive in Athens and board your flight to Thessaloniki. After landing, meet your local tour manager and transfer via private motorcoach to your hotel. Check-in and freshen up before enjoying dinner and optional Mass at the hotel. Overnight in Thessaloniki.

After breakfast, take a tour of Thessaloniki (Acts 17:1-9), the home of the Thessalonians, to whom St. Paul addressed two of his epistles. Visit the White Tower, Church of St. George, Statue of Alexander the Great, and the churches of St. Demetrius and St. Sophia. Celebrate Mass at the Thessaloniki Cathedral of the Immaculate Conception and hear Steve’s brief talk on Paul’s two letters to the Thessalonians. Lunch on your own before a 1-hour drive to Berea where Paul preached as they searched the scriptures (Acts 17:10-15). Have the rest of the afternoon at leisure to explore the city. Dinner at the hotel and overnight in Thessaloniki.

Visit Kavala where Paul, Silas, Luke, and Timothy first set foot in Europe. Travel to Philippi, where Paul first preached the Gospel on European soil (Acts 16:12). Celebrate Mass outdoors on the river’s edge where Paul baptized Lydia, his first European convert. Sit in the Roman theatre for Steve’s talk “What Must I Do To Be Saved” (Acts 16:30). See ancient Philippi where St. Paul and St. Sylas preached and were imprisoned. Following the Via Egnatia back to Kavala (Ancient Neapolis, Acts 16:11), stop to walk on the actual stones on which Paul trod. Late group lunch at a local restaurant, and see the mosaic of Paul’s visit nearby. Drive back to Thessaloniki for dinner at the hotel and overnight in Thessaloniki.

This morning transfer to the airport for your flight to Athens. Upon arrival, drive to Piraeus for embarkation on our ship, the Celestyal Olympia. Celebrate Mass onboard en route to Mykonos. Explore the highlights of the first port in Mykonos with your tour manager and enjoy time at leisure in the city. Seminar talks by Steve Ray, Fr. Chris Alar, and Fr. James Conlon on the ship to be announced.

This morning port in Kusadasi then drive to Ephesus (Acts 19). Visit the House of Mary and celebrate Mass there. Tour the ancient city of Ephesus including the 24,000 seat theatre and the church of Mary that hosted the 4th Ecumenical Council. Hear Steve’s talk on “Mary, Mother of God.” Experience the art of rugmaking. Return to the ship for Steve’s “Life and Teaching of St. Paul” and enjoy the beautiful sights of the Mediterranean Sea as you set sail for Patmos where St. John received his revelation which is the last book of the Bible (Rev 1:9). Visit St. John’s Monastery and the Grotto of the Apocalypse. Go shopping along the shore as time permits.

NOTE: The current tourist status in Turkey allows cruise ship passengers to exit the ship and participate in the Ephesus excursion.

Port in Rhodes this morning and take a medieval tour of the island, including stops at the Acropolis of Lindos and Citadel of the Knights. Steep hike to see the port where St. Paul landed (Acts 21:1). Celebrate Mass at Santa Maria Monastery. Lunch will be served back on the ship, followed by free time in the afternoon.

This morning port at the Isle of Crete (Titus 1:5). Celebrate Mass at St. John the Baptist Church, and enjoy the morning at leisure. Continue to Santorini, for your final relaxing afternoon at port for shopping, exploring, and time at leisure. Dinner tonight on board the ship.

This morning disembark your ship in Piraeus and depart for Athens. Upon arrival, enjoy a panoramic city tour. Visit the Acropolis, Mars Hill, see the House of Parliament, and more. Stand on Mars Hill where Paul spoke to the Athenians and hear Steve’s talk on Paul’s methods of evangelization (Acts 17:16-34). Enjoy lunch on your own. Celebrate Mass at the Cathedral of St. Dionysius. Dinner at the hotel and overnight in Athens.

Drive along the beautiful coastal road to Corinth, home to Paul for 18 months (Acts 18:1-22). Cross over the amazing Corinth Canal dug between two seas. Tour ancient Corinth. See the Bema (judgment seat) where Paul was presented for judgment. Celebrate an outdoor Mass. See the biblical Erastus Stone (Romans 16:23), and hear Steve’s talk “We Can Trust the Bible.” Lunch as a group at the Corinth Canal. Return to Athens in the late afternoon for dinner at a local restaurant and overnight in Athens.

Depart to the airport for your return flights home or to begin your Rome extension.

Upon arriving in Rome, meet your Italian tour manager. Visit St. Clemente’s Church with its tombs of Apostolic Fathers Ignatius and Clement and 1st-century excavations beneath. Continue to Mass and visit St. John Lateran, the Mother Church of the World with St. Peter’s Chair. Dinner at the hotel and overnight in Rome.

Begin your morning by celebrating Mass at St. Peter’s tomb or the tomb of St. John Paul II (pending confirmation). Then, enjoy a visit to St. Peter’s Basilica where Michelangelo’s “Pieta” will be just one of the highlights. Continue to the Tre Fontane Abbey, where Paul was beheaded. Visit St. Paul Outside the Walls, where his bones are today. Italian dinner and overnight in Rome.

After breakfast at the hotel, transfer to airport for return flights to USA.