How Odd of God 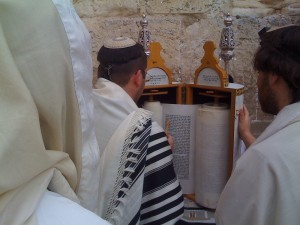 This clever couplet was written by British journalist William Norman Ewer (1885-1976). It causes one to wonder why there is, and always has been, such virulent antisemitism in the world. It is especially amazing in the “enlightened, modern” Western world. I can understand the hatred among displaced Palestinians; but the widespread hatred in the rest of the world?

(Picture: I took this picture at the Western Wall on our last trip. A young man is reading from the Torah scroll with the aid of a reading pointer.)

As I leave for Jerusalem on Saturday I am again anxious to stand in the heart of God’s city surrounded by Jews and Arabs and Christians. I am always amazed that there are only 13 million Jews in the whole world. Their survival over the centuries and their disproportionate influence in the world causes me to believe that they still somehow bear the stamp of God’s blessing. I think that blessing can also be seen in the great numbers of Jews who are now finding their Messiah — the Jewish Savior of the world — Jesus Christ.

It might be considered odd that God would choose the Jew, but consider that God actually BECAME a Jew — and we as Christians are his brothers. And it that is not amazing enough, consider that the Jewish Mary is our mother (e.g., Rev 12:17)! As Pope Pius XI said, “We are all spiritual Semites.”