St. Augustine Florida: Where it All Began in America!

You can watch the full length Pilgrimage below or download it here. 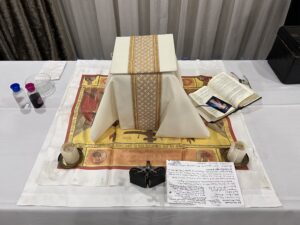 Today is the culmination of our well received and successful pilgrimage with great folks parasites, guys and spiritual experiences with enjoyable fellowship

UPDATE: We are unhappy to announce that Al and Sally Kresta will be unable to join us as we had hoped and advertised. Steve and Janet will still lead the group as usual, without the participation of the Krestas.

VISIT THE BIRTHPLACE OF THE CATHOLIC CHURCH IN AMERICA

Imagine it is 1565: Five ships sail into a small cove on the coastline of what was known to the Spanish as La Florida. Under the command of General Pedro Menéndez de Aviles, they come to the New World from Spain.

Sent by King Philip II, they arrive in hopes of establishing a colony, securing the land for Spain, and most importantly, to convert the native American Indians to Christianity.

On September 8, 1565, the feast day of the nativity of the Blessed Virgin Mary, the Spanish on the ships, sailors, soldiers, tradesmen and priests, came ashore. Father Francisco López de Mendoza Grajales, recorded the day’s events in his diary:

“On Saturday, the eighth, the General landed, with many banners spread, to the sounds of trumpets and the salutes of artillery. As I had gone ashore the evening before, I took a cross and went to meet him, singing the hymn “Te Deum Laudamus.” The General, followed by all who accompanied him, marched up to the cross, knelt and kissed it. A large number of Indians watched these proceedings and imitated all that they saw done.”

Following Menendez’s veneration of the Cross, thus proclaiming this land in the name of God (Nomre de Dios,) Father Lopez celebrated Mass at a rustic altar made of wood. The sky served as the roof for what was the first parish Mass in what is now the United States. 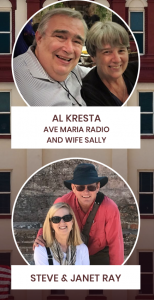 • Transfer via private motorcoach to St. Augustine, FL, where you will meet your hosts, Steve and Janet Ray.

• Stations of the Cross built with stones.

• Picnic lunch on the grounds of the Shrine.

The cathedral walls are adorned with exquisite murals that depict scenes from the history of the Catholic Church in the development of the New World. There are also stained-glass windows showing scenes from the life of Saint Augustine of Hippo, for whom the city was named.

• Old Town sightseeing Tour. Discover St. Augustine’s old-world history as we ride a specially designed tour train along the narrow cobblestone streets. A great way to get the lay of the land for free time later. Delight in the city’s European flavor, with centuries-old buildings, horse-drawn carriages, hidden courtyards, and so much more. Saint Augustine has plenty of history to explore — more than 450 years of it!

• Fountain of Youth Archeological Site. Ponce de León was said to be searching for the Fountain of Youth when he discovered Florida here in 1513. See the Coquina (stone) Cross estimated to date back to 1513 when Ponce de Leon landed. Take a drink from the famous fountain, and take some pictures of the spectacularly beautiful peacocks which roam the grounds.

• Free time this afternoon in Old Town or the hotel pool.

• Dinner and shopping on your own in the Old Town.

DAY 3: Birthplace of the Catholic Church in America | Farwell Dinner

• Stations of the Cross built with stones.

• Picnic lunch on the grounds of the Shrine.

• Return to the hotel to freshen up.

• Closing Mass with our new friends.

• Following a wonderful visit to Historic St. Augustine, Birthplace of the Catholic Church in America, depart to Jacksonville Airport.

* All itinerary highlights and details are subject to change.

• Breakfast daily at the hotel

• Talks by Steve and Janet Ray

• Hotel and city taxes and porterage for 1 piece of luggage

AIRFARE TO JACKSONVILLE IS NOT INCLUDED, THIS TOUR PACKAGE IS SOLD “LAND ONLY.”

DO NOT PURCHASE AIRFARE UNTIL NOTIFIED IN WRITING THAT THE TRIP HAS ENOUGH PASSENGERS TO OPERATE.

THE TOUR DOES NOT INCLUDE: