75th Anniversary of D-Day in Normandy with President Trump 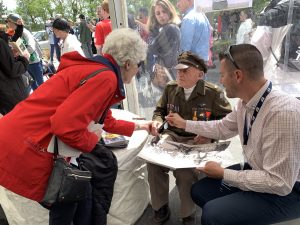 Today was a marvelous day with our group and Normandy France celebrating his 75th anniversary of D-Day. We were among still living heroes who jumped that day and joined by president of France and President Trump. It was a grand celebration!

Even though it was to commemorate men who had died it was a celebration of their heroism, bravery, self-sacrifice and victory. Sitting among over 9000 crosses marking the graves of brave Americans was overwhelming. 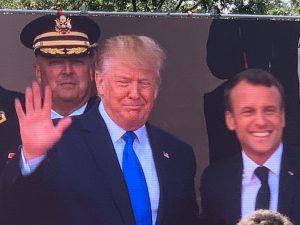 French president Macron was gracious and eloquent. Donald Trump was the same old wonderful self. He gave a heartfelt speech and told the stories of several men who jumped that day, and they were there with him to receive his accolades.

The crowd continued to rise to their feet with supplies and cheering and it made us all proud to be Americans. He reminded us that we are a brave, righteous and caring people who are always willing to help others fight for liberty.

The military jets and planes screaming overhead and the sound of helicopters and artillery fire was a frosting on the cake. Marilyn Walton was able to find the graves of the men who died serving with her father. It was a tearjerker.

I asked one soldier who was serving there if he was glad he was there today and not 75 years ago. He said, “Yes and No.”  I asked him if he had been there 75 years ago if he would’ve been willing to fight and charge the beaches. Without blinking he said, “Yes sir, in a heartbeat, for love of my country and our people.”

It was a marvelous day and everyone was very exhilarated and now exhausted. I’m sorry that YouTube only gives me 15 minutes but I hope that I shared enough of the highlights so that you’ll feel like you were with us they’re a bit today. God bless America!