A Day to Remember: Fr. Sean Celebrates Mass with us in the Tomb of Christ 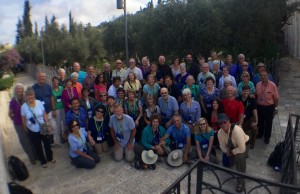 The alarm went off at 4:30 AM. Oh my! But everyone thanked us later. It allowed us to pray the Stations of the Cross along the Via Dolorosa without crowds or interruption.

It also allowed us to enter the Church of the Holy Sepulchre, touch the top of Calvary with a prayer on our lips before being seated on our benches for a private Mass with the Franciscans at the Tomb of Christ. Wow!

Deacon Ron and Fr. Sean Sheridan (President of Franciscan University of Steubenville) celebrated Mass INSIDE the Tomb. It was awesome and everyone was overwhelmed.

After breakfast a trip to the Church of St. Stephen’s where the first martyr was killed. I gave a long talk there about St. Stephen and St. Paul. We gave everyone some free time to explore Jerusalem on their own as you will see in the video.

Then a Holy Shroud Exhibit tour, dinner, my talk on the Israeli-Palestinian situation and time for the group to gather for reflection of their impression and experiences of this pilgrimage.

VIA DOLOROSA, CALVARY AND MASS AT THE TOMB

PART 2 WITH ST. STEPHEN’S CHURCH, WALKING THROUGH THE OLD CITY AND MORE