And today it all begins! Our pilgrims arrived in good stead at 8:30 AM at the Melpensa Airport on their Delta flight from New York.

We were there to greet them and the deplaning process was simple. We boarded our bus for the hour drive to downtown Milan. Along the way we opened the pilgrimage with prayer, all got acquainted, and prepared everyone for the delights that await them!

We arrived to tour the magnificent Duomo Cathedral which is impossible for a camera to capture, try as I will!

Five hundred years to build, 3,500 statues, and the 3rd largest church in the world. It’s Gothic construction makes it look light and feathery even though it is massive. We celebrated Mass at the Duomo. 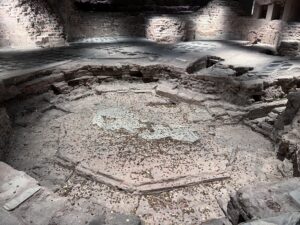 Fascinating for me to revisit, is the discovery of the baptismal font below the church in the remains of an earlier church where St. Augustine was baptized by St. Ambrose in AD 387.

“In the book Font of Life: Ambrose, Augustine & The Mystery of Baptism, we read of the remarkable moment when their lives intersected at one of the most important, yet rarely visited, sites in the Christian world. Hidden under the piazza of the Duomo in Milan lies part of the foundations of a fourth-century cathedral where, at dawn on Easter of 387, Augustine and a group of people seeking baptism gathered after an all-night vigil.

“Ambrose himself performed the sacrament and the catechumens were greeted by their fellows in the faith, which included Augustine’s mother Monica. Though the occasion had deep significance for the participants, this little cluster of devotees was unaware that they were creating the future of the Western church.” 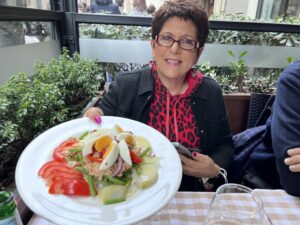 Free time for lunch in a whole array of pizzerias, cafes and ristorantes (Italian spelling). Lots of shopping and exploring before checking in to our Concorde Hotel for dinner and early to bed.