At Auschwitz Today: St. Maximillian Kolbe the Martyr and Auschwitz


Since we are walking through the horror of Auschwitz today I wanted to share the story of one hero who gave his life in exchange for another man–a father and husband. St. Maximilian Kolbe was starved to death – and we visit his death cell today.

St. Maximilian Kolbe was born as Raymund Kolbe on January 8, 1894, in the Kingdom of Poland, part of the Russian Empire. He was a Polish Conventual Franciscan friar and a martyr in the German death Camp of Auschwitz during World War II. 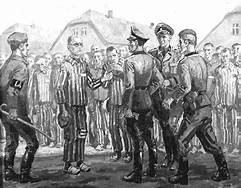 On February 17, 1941, his monastery was shut down; Kolbe was arrested by the German Gestapo and taken to the Pawiak prison. Three months later, he was transferred to Auschwitz.

In order to discourage escapes, Auschwitz had a rule that if a man escaped, ten men would be killed in retaliation. In July 1941 a man from Kolbe’s bunker escaped. The dreadful irony of the story is that the escaped prisoner was later found drowned in a camp latrine, so the terrible reprisals had been exercised without cause. But the remaining men of the bunker were led out.

‘The fugitive has not been found!’
the commandant Karl Fritsch screamed. “You will all pay for this. Ten of you will be locked in the starvation bunker without food or water until they die.” The prisoners trembled in terror. A few days in this bunker without food and water, and a  man’s intestines dried up and his brain turned to fire.

The ten were selected, including Franciszek Gajowniczek, imprisoned for helping the Polish Resistance. He couldn’t help a cry of anguish. “My poor wife!” he sobbed. “My poor children! What will they do?” When he uttered this cry of dismay, Maximilian stepped silently forward, took off his cap, and stood before the commandant and said, “I am a Catholic priest. Let me take his place. I am old. He has a wife and children.”


Astounded, the icy-faced Nazi commandant asked, ‘What does this Polish pig want?’ Father Kolbe  pointed with his hand to the condemned Franciszek Gajowniczek and repeated “I am a Catholic priest from Poland; I would like to take his place, because he has a wife and children.”