It has been snowing hard for 24 hours. Very interesting and much needed since there has been very little precipitation in Israel. Snow weighing down Palm trees is not something you see every day.

Maybe it's why snow isn't mentioned very often in the Bible (24 times) — only twice in the New Testament: Matthew 28:3 where the angel at Jesus' tomb was dressed in clothing as "white as snow"; and Revelation 1:14 where Jesus' head and hair were "white like wool, like snow." 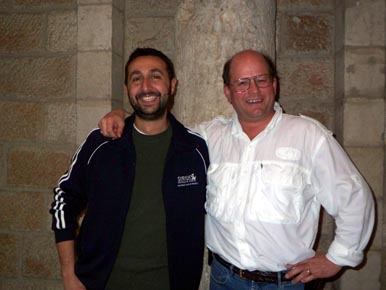 My favorite is in a reference to one of David's Mighty Men: "Then Benaiah the son of Jehoiada, the son of a valiant man of Kabzeel, who had done mighty deeds, killed the two sons of Ariel of Moab. He also went down and killed a lion in the middle of a pit on a snowy day (2 Sam. 23:20). This must have taken place near Jerusalem or Bethlehem — up in the mountains.

We left our hotel in Jerusalem at midnight and drove down to Tel Aviv where it is only raining. It took 3 times longer than normal since the snow has choked the city.

Spent some time with Lino Rulli — Sirius Satellite Catholic Radio's "The Catholic Guy." We had some good times together in Jerusalem. (More pictures of Lino in the video here.)