Bishop Conley’s Comments on our Cruise: “In the Footprints of St. Paul” 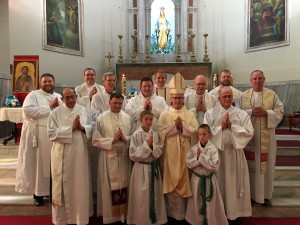 The Bishop with all our Clergy in Thessaloniki

The ancient Christian writer and theologian Tertullian once asked the Church, “What does Athens have to do with Jerusalem?”

He asked the question as Christianity spread from Israel into the Greek world; and as Greek intellectuals looked for deeper insight into the Christian mystery. Tertullian was asking whether pagan Greek culture—philosophy, poetry, the arts, history and literature—had anything of value for those first missionaries proclaiming the Christian gospel.

Two weeks ago, on a plane landing in Athens, I asked myself Tertullian’s question.  I was in Athens to begin a spiritual pilgrimage to Greece and Turkey “in the footsteps of St. Paul.” I was with a group of pilgrims celebrating the 15th anniversary of Spirit Catholic Radio: eight priests from Lincoln and Omaha; three deacons;140 lay Catholics from across Nebraska and beyond.

We were led by Steve and Janet Ray, expert pilgrim leaders, and Jim and Karol Carroll of Spirit Catholic Radio. It was a joy and a grace for me to walk as a pilgrim in the footsteps of St. Paul, the great Apostle to the Gentiles, with fellow disciples of Jesus Christ from our state. 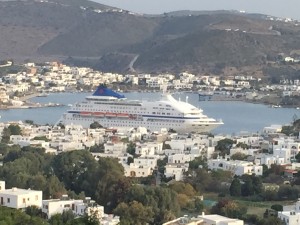 Our Ship Docked on Island of Patmos

By cruise ship on the Aegean Sea, we visited and celebrated Holy Mass in Thessoloniki, Philippi, Istanbul, Pergamon, Ephesus, Patmos, Athens and Corinth. We heard talks at these holy sites, given by Steve Ray, Catholic convert, author and film maker, who leads Catholic pilgrimages all over the world.  We heard inspiring homilies by holy priests. We prayed together for all the special prayer intentions we brought with us from home. 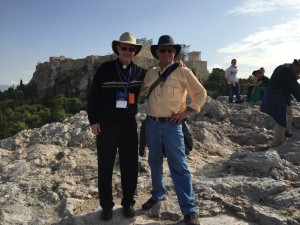 The Bishop and Steve on Mars Hill in Athens where St. Paul Taught

When St. Paul arrived in Athens, he preached the gospel at the famous Areopagus, a gathering place just beneath the Parthenon. He was able to speak to the Greeks in their own language. He was able to quote Greek poets and philosophers. He appealed to Greeks in their own cultural language because he was schooled in Tarsus, the successor to the school of Athens as the center of learning and education in Asia Minor.

Paul was run out of town after his first visit to Athens.  But he was able to plant the Lord’s seeds of conversion in the hearts and minds of the Athenians—the movers and shakers of the ancient world. He would eventually come back to cultivate those seeds that were planted.

Paul was able to use his fluency with the language, culture and customs of the Greek world in order to present the compelling message of Jesus Christ in a way that was attractive and persuasive. To be sure, St. Paul suffered a great deal during his missionary journeys to the Greek world. The Greeks were highly educated and influential. They were also utterly pagan. They worshiped false gods, they were self-indulgent and decadent, and they were infatuated with progress, technology, and the latest new fad. Paul preached to a world not much different than ours today….

The whole article is excellent and you can read the rest of it HERE. Also on Zenit.org.

You will find out why the picture below was the highlight of Bishop Conley’s trip. 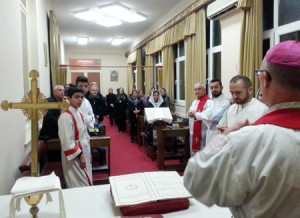