Our last and full day was happy and sad. Happy because it was a great day and sad because we knew it was our last day together. 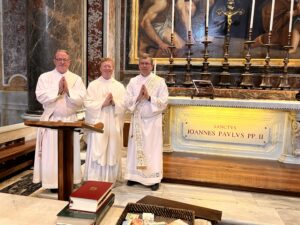 We started out with a great blessing from God which was a surprise for us all. We had a Mass scheduled at St. Peters but when we arrived they asked if we would like to have the altar which is the tomb of St. John Paul II. What do you think we said?

After Liz Lev took us on a tour of St. Peter’s Basilica the bus and headed to Tre Fontone which is one of my favorite places. It’s where Paul walked his final steps along the Roman Road to a column to which he was chained and beheaded. I do a talk there about the end of Saint Paul’s life.

San Clemente is a very unique church in Rome not only because it has the bones of Saint Ignatius of Antioch and Saint Clement of Rome, but also because you can descend through the centuries underneath. One flight of steps brings you to a fourth century huge Basilica and below that we walked the streets of first century Rome.

Everyone had the afternoon free to do their final shopping and food tasting and exploring. We gathered again to go to our last dinner together at the Ristorante L’Archeologia which was very celebratory. And then in the morning we all said goodbye as the bus took the pilgrims to the airport.