Did Solomon’s Mother Bathsheba Demonstrate Mary is NOT a Good Intercessor? 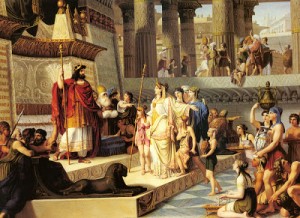 I put up a post a few days ago with a video of my talk in Ephesus about Mary being Queen of Heaven and an Intercessor for the people of God’s kingdom.

Someone wrote to object saying,

Let me explain a bit. Solomon is a type of Christ yet Solomon was a sinner. Solomon’s sin does not detract from Jesus’ perfection as the quintessential king of Israel and the Universe.

Every king had a queen but it was never his wife; it was his mother. She was called giborah, great lady and Queen Mother.

I didn’t miss anything.