Entering the Empty Tomb; A Contrast – Now and Back Then (our 1st group arriving in Israel today) 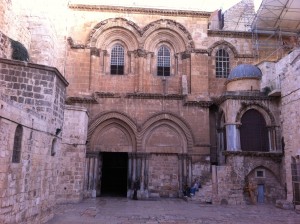 It looks different today, but the place is the same. It is darker now, covered with a dome that blocks the sun. There is no grass, no hillside, no trees waving their leaves nearby.

Instead there are the hushed voices of hundreds of people, the Muslim call to prayer echoing in the distance and the smell of incense in the air. It takes a few minutes for your eyes to adjust to the darkness and the uneven stone floor.

Hundreds enter with you but most stop inside the massive doors not quite sure what to do now. There are no signs or directions, only the imposing sense of having arrived and awe-inspiring columns and pillars, passageways and stairs. Now what? 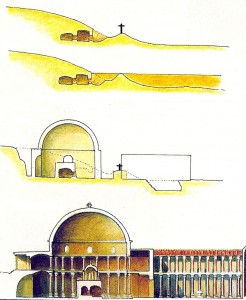 Two thousand years ago the appearance was very different. No people swarmed the site and all that could be heard was the groaning of men hanging by torturous nails from rough-hewn crosses of wood. The few people who had to pass this way hurried along without much of a glance. The scene was too horrible and too common.

For all its morbidity the location was in a garden of sorts. But the executions that took place in this garden outside the city walls prevented it from being used by families as a place to picnic. The tombs nearby were not the kind of surroundings for children at play. But it was a garden with a gardener and it had a specific use. 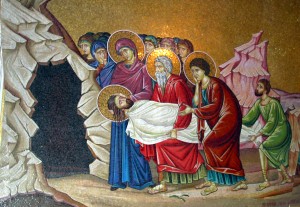 Today there were three men hanging in this uninviting garden. Only a few curious on-lookers and friends lingered nearby. The criminals had paid the price for their crimes and not many gave them a second look. Rumor had it though, that the one in the middle was a bit unusual. Pilate had come from Caesarea and had convened a special trial to prevent a riot from taking place in the city. Word had it the the man in the middle was killed even though he had done no wrong. He was killed for expediency to keep the peace.

It was not long before a small contingency of men arrived with the necessary supplies needed to prepare his body for burial. They seemed uninterested in the two thieves on the left and right but went straight for the man in the middle. He was a mess. The soldiers must have really had their sport with him back at the Antonia Fortress. His naked body hid none of their sadistic pleasures. 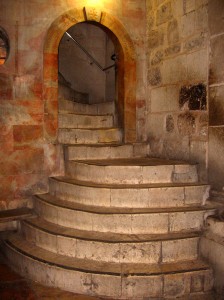 He was taken from the cross. His mother was there, one of the few left to view the sickening spectacle. A rich man had taken interest in this corpse and placed it in a tomb he’d recently cut into the side of the rocks for himself. Tombs had chambers and the dead were laid on flat niches carved into the stone. Only the wealthy could afford such a burial.

As the sun made it’s final dip below the hills to the west, the men exited the tomb with blood still on their hands and they rolled a massive stone in front of the tomb to keep others from entering and to keep the stench inside as the flesh began to decompose. The deed was done, the aftermath cleaned up and the body buried. It was over.

The organ begins its thunderous pulse through the ancient building as words in Latin are sung, not with the polished precision of an accomplished choir but with the often discordant notes sung by regular folks. Millions of people from ever language, tongue, tribe and nation of the earth have gravitated to this one-time garden. Many have spent their life savings to come here.

Others, especially in centuries gone by, have spent months on tossing ships and trudging through hot deserts deprived of all creaturely comforts just for this moment — the moment of stepping through these massive doors to the sound of Latin, the chanting of the monks and the pulsing of the organ. 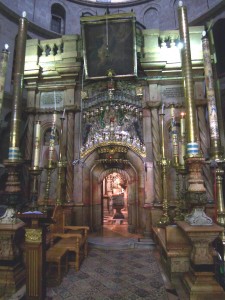 Many have backed their way out to take a second look. How could this and the garden be the same place. There is no physical comparison. Yet they are the same place. The hill on which the crosses stood in the morbid garden is still here. Devotion and love have changed its appearance over the centuries. There are now oil lamps, altars, candles, statues and ancient icons and mosaics depicting the scene and interpreting its meaning for untold millions.

Jesus hung on a cross on this rocky crag of a hill two thousand years ago. I tell my pilgrims, “Get in line, step up to that altar, bow down and move under the altar. Put you hand down into the hole and you will feel the stone where the foot of the cross was standing. Remember, if you put your hand there 2,000 years ago, it would come up sticky with his blood.”

A statue of Mary to the right side, reminds us she was one of the few stragglers that lingered after the crucifixion. He statue is encased in glass and the artist was truly an artist. Her face is haunting. Her eyes have a great peace mixed inextricably with a stare of horror. It is obvious she trusted the plan of God but was still wracked with pain at the death of her Son. You cannot pull your eyes away from the sword jutting out of her chest. Thirty three years earlier the prophet Simeon had told this young mother that a sword would pierce her soul as well. 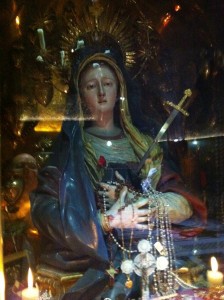 And not a stone’s throw away the place of the cross is still, even after two millennia, the tomb where the body was laid. It doesn’t look like a tomb carved into a rocky hillside. It is an obtrusive metal framework holding up stones blacked by centuries of soot from candles and olive oil lamps. Again, it is love and devotion that changed its appearance. It is love because from this tomb everything changed. No science fiction writer or Greek philosopher could have conceived of such an story. Sometimes truth is stranger that fiction.

After the men left the garden long ago everyone thought it was over — it was done. He was dead and buried and it was time to go on in life without their friend. But it was not over. It had only just begun. In the darkness of the morning two days later something happened that changed the world and all of eternity forever. With the massive stone still in place and guarded by Roman soldiers, the dead body sat up, romoved the heavy stone and stepped out alive.