First Days in Israel – Video Below 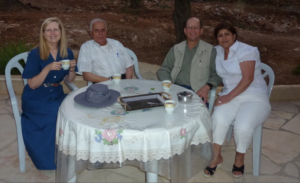 I made a short YouTube video of our arrival in Israel. I will upload it when I get a good internet connection. Here at the Notre Dame it is abysmally slow. It said it would be 5 hours to upload and by then I would have my face fall into the bowl of salad in front of me. (Click on all images for larger pictures).

We landed a few days ahead of the Holy Cross group from Batavia Illinois. Janet and I make sure everything is prepared and ready. We had lunch with our good friends from Bethlehem — Deacon Johnny and Gladies Kaissieh. You will see them and the delicious Palestinian lunch she made for us. They were the most gracious Christian hosts. They also drove us around Bethlehem to show us their church, the sites and more.

We met with Raji our Christian agent in Jerusalem last night. We made sure everything was ready for both groups — Batavia and the 50 people coming in a few weeks from Legatus. We had a hard time sleeping due to jet lag.

This morning I took off for a long run through the Ultra-orthodox area called Mea Shariem followed by the Muslim area around the Damascus and Herod Gates. 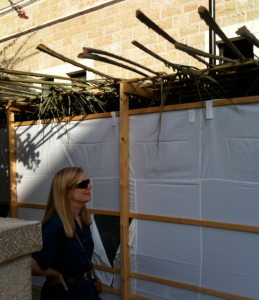 Today is the first day of Succoth (Sukkot) for the Jews (Lev 23:39-44). It was fascinating running through the streets and alleys watching them build their booths and buying their special citrons. God commanded Moses and the children of Israel to build booths (or little sheds) covered with branches to remind them that they had been sojourners in the wilderness. (Later Janet and I walked around to see all the booths covered with palm branches.)

People think Peter was foolish to say to Jesus at the Transfiguration, “Let build tents for you and Moses and Elijah!” He was not altogether out of line since it was likely the festival of booths when the people were building booths for themselves and guest — living for one week under the branched-covered tents. 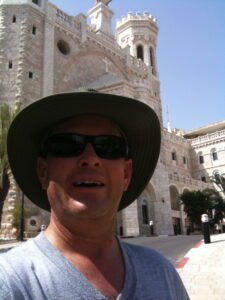 It was then about time for the Muslims to enter the Old City for Friday prayers at the mosques at the Dome of the Rock. It is always a bit tense since the Jewish military only allow women and older men to enter to avoid trouble. It was a great run not only for health but because it was SO interesting.

Then Janet and I went for a long walk to the Jaffa Gate dropping off gifts at the Latin Patriarchate for the Missionaries of Charity in Nablus, drank pomegranate juice near the Franciscan bookstore and then over to West Jerusalem to check out the Dan Panorama Hotel we have reserved for the Legatus group. Dinner and bed.

Tomorrow I will run early in the morning, eat breakfast, pack and then at 2 PM we drive to the airport to pick up Msrg. Deutsch and his group. We will then drive 2 hours to Galilee. Stay tuned for daily videos if God wills and technology cooperates.

IT MAY TAKE TIME FOR THE VIDEO TO BE APPROVED — STAY TUNED.