My early morning hike through Galway Ireland before breakfast can be seen HERE. It has videos, pictures and an interactive map. Galway in the morning is gorgeous.

Our second day of pilgrimage through Ireland began with Batt Burns, our local guide – who is far more than just a guide. He is primarily the premier Irish story-teller. This morning we started with his introduction to his home country entitled “My Ireland.” Wonderful and full of laughs. A bit of his personal story, a summary of St. Patrick’s work in Ireland and some hilarious Irish tales.

Then to the Shrine of Knock where the Blessed Virgin Mary appeared in 1879 but not alone. St. Joseph, St. John the Apostle and the Lamb of God on an altar appeared with her. This is right out of the Book of Revelation which John wrote. He was the bishop of Ephesus and exiled on Patmos. He wrote his Revelation from there.

He was mentioned from the 2nd century as wearing a bishop’s mitre and in this apparition he had the mitre of a bishop on his head and was holding the Scriptures in his hand. St. Joseph appeared in silent prayer. Mary is the queen of heaven from Revelation 12:1 and Jesus appeared as the Lamb of God, on an altar slain though still alive (Revelation 5:6).

The Holy Family was all there: Joseph, Mary, Jesus, and John who cared for Mary until her death and assumption into heaven. But the four also represent the Mass: St. Joseph in prayer, Mary in adoration of God in heaven, the Lamb of God as the sacrifice and John preaching the word.

Beautiful Mass with Fr. Courtney. Then to Claremorris for lunch before visiting the 13th century Abbey built over the place St. Patrick baptized the pagans in the 5th century. Children today are baptized in a 1,000 year old baptismal font. The history of the Abbey is bitter sweet and demonstrates the vibrant faith of the Irish. 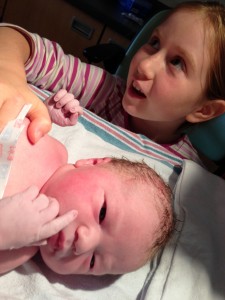 After that we visited the stunning Cathedral of Galway before arriving back at the hotel. Everyone had the evening free to scatter through the quaint city to find one of hundreds of pubs and restaurants with authentic music and delicious seafood. It was a great day.

On top of that, my son Jesse and his wife Anna gave birth to our 11th grandchild today – Joseph Charles Francis Ray who weighed in with a lot of hair at 7 lbs. 15 oz.