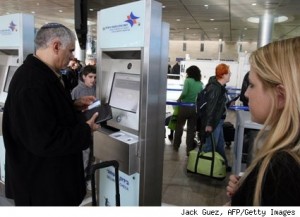 In six hours Janet and I leave for Israel along with a great group that fills a bus. We will land at Ben Gurion Airport in Tel Aviv and we will leave from there in about two weeks. And yes, I feel very safe. Israel knows what they are doing. 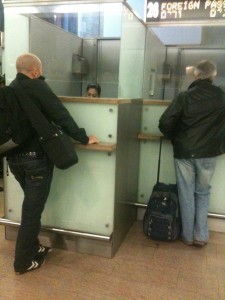 My daughter Charlotte was traveling with us when she was ten and the American security took her aside to frisk her and asked if she had a bomb. Israel is too smart for that.They KNOW who tries to blow up planes — young Muslim men.

(Picture to the left: I took it Monday at the Tel Aviv Airport)

America is wrestling more than ever about the security issue. To cover their behinders the administration will probably decide to prove they are doing more by harassing the the ones they are supposed to protect while protecting the ones that cause the problems because the US doesn’t want to be accused of profiling or being racially or religiously insensitive.

Anyway, I will endure the American security and admire the Israeli security and hope for the day when America smartens up.

Here is an interesting article about the Israeli security system.