By the end of 2018, Israel expects to reach and even surpass the 4 million tourist mark. 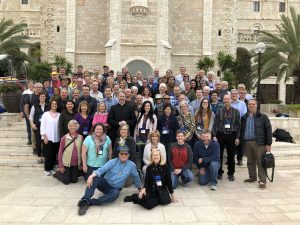 “Minister of Tourism Yariv Levin noted that these excellent statistics, which are recorded month after month, are a direct result of the Ministry of Tourism’s innovative marketing activities. By the end of 2018, the ministry expects to reach and even surpass the 4 million tourist mark. An increase of tens of percent in incoming tourism over the past two years has placed Israel among the world’s fastest-growing countries in tourism. Since the beginning of the year, the tourism industry has contributed more than NIS 18 billion to the Israeli economy.”

(STEVE’S NOTE: I find this fascinating, especially since we started taking groups to Israel in 2005 when NO ONE was going. Israel was empty and we “owned” the sites. Now it is so crowded I look back at the good old days with fond memories. Now everyone and their brother are taking groups to Israel — but remember, not all pilgrimages are created equal.)