Italy 7: Assisi to Loreto to Manoppello to Lanciano


Another eventful day but also a good bit of bus time which we filled with fun activities. After a casual breakfast we left our Giotto Hotel and went down into the valley to visit the Church of Mary of the Angels. This is where the Portiuncola is situated, the small chapel where the San Damiano cross spoke to St. Francis around 1200. 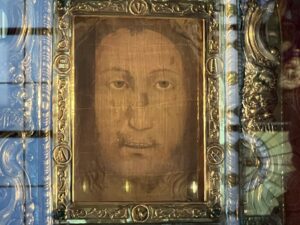 Another drive brought us to the Holy House of Loreto, then to Manoppello where we venerated the face cloth of Christ and had Mass. To understand what we saw here I am quoting from St. John’s gospel word explains the face cloth.

John 20:6–7 “Simon Peter came, following him, and went into the tomb. He saw the linen cloths lying there, and the face cloth, which had been on Jesus’ head, not lying with the linen cloths but folded up in a place by itself.”

Another hour drive to the beautiful Abruzzo region brought us to Lunciano where we settled into our hotel and had a nice dinner. Tomorrow we’ll have Mass in front of the Eucharistic miracle.