Join Us in the Holy Land! Ah, but is it Safe? 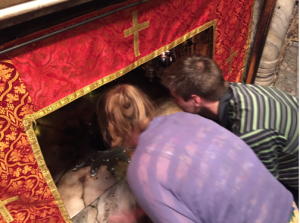 Touching the place where Jesus was born

We are leaving for the Holy Land on December 26th. We will be spending the rest of the Christmas Season there — with Mass and a day in Bethlehem where it all got started. We are expecting it to be a glorious pilgrimage like the 70 others we have led in the last 10 years. IT IS NOT TOO LATE TO JOIN US!

However, some family and friends are concerned about the safety of their loved ones. Even some going on the trip are starting to get nervous as they watch the news – which is understandable. So I would like to put a few things in perspective. 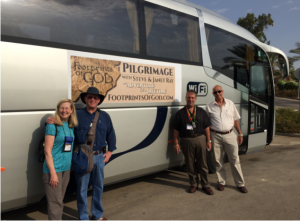 "The Team" with our new bus signs

First, there are always tensions and problems in the Middle East. If someone waits until Israel’s neighbors are showering rose petals on Jerusalem they will never go to see the land of our Lord and our Lady. If you wait until everything is quiet, you will never go.

Second, last year there were a record number of tourists and pilgrims visiting Israel. The years before had reached 3.5 million but now the the numbers have reached 4 million. Yet, not one of them has ever been hurt or impeded by any acts of violence. We took a group of 55 people in September and another group of 45 people in October and all of them felt completely safe and thanked us over and over again for not canceling the trips. 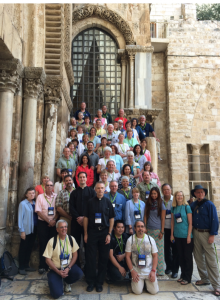 Our group in September, and another in October

My friend and guide Amer Shehadeh is leading a group of 55 pilgrims from Texas right now. I just spoke with him on the phone and he said all the pilgrims are having a wonderful time. Yesterday Jews were killed in a synagogue. Amer asked if anyone wanted to quit or go home and they all said, “No way!” Being there provides a sense of perspective, something we lose watching the nightly news in America.

Third, all of the acts of violence over the last month or two that have made the headlines here in America are perpetrated against Jews in very Jewish areas. The targets are not tourists or Americans or Christians on pilgrimage. The problems have taken place in areas we never frequent. We know areas to avoid and we will avoid them. We work with experts and the best and we know how to keep our people out of harms way. 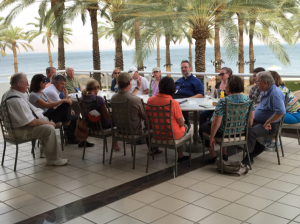 Evening discussion group over a bottle of wine

The fighting is between two groups — a tit-for-tat situation of retaliation. Each group knows the other and we are not included in those groups. When the Hatfield’s and McCoy’s have their feuds they don’t go after the Smith’s and the Jones’.

For those who have ISIS in the back of their mind, or the fighting in Syria and Iraq — never give this a second thought. These situations are a million miles away from Israel and our pilgrimage route. Israel has one of the strongest militaries in the world and these localized wars have no effect on us in the Holy Land.

Fourth, I find it intriguing that in Detroit, Chicago and other major cities in United States there are hundreds upon hundreds of murders, homicides, rapes, drug wars and retaliations (see chart below). Yet they rarely make the evening news. I don’t know anyone who’s afraid afraid to fly into Chicago to see the sights or visit friends. But let four Jewish rabbis get murdered in a synagogue in Jerusalem and it makes headlines all over the world and everyone panics about flying into Tel Aviv, the safest airport in the world. I find this a bit ironic. Panic-by-media! 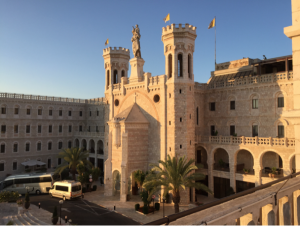 Our Vatican-owned hotel in Jerusalem

Fifth, we are watching the news daily and pinpointing the locations where the incidents take place. We would never take anyone into harm’s way and we know how to react if there ever was a problem while we are there. In other words, there should be no worries for those joining us on this trip as we are mingling with the millions of others who are visiting the lands of the Bible safely and with no concern.

Sixth, if anyone wants to talk about this more please feel free to write me at SRay@me.com and we can set up a phone conversation. Once we are in the land everyone on the bus will thank me over and over again for not canceling the trip. We know from year’s of experience since it has never been completely quiet in the Middle East. If anyone gets there and becomes fearful (which has never happened with the thousands we have taken) we can always make arrangements for them to return home the next day. 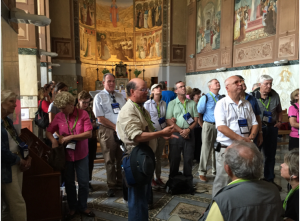 Learning about Mary Ark of New Covenant at Visitation

Seventh, I will be posting daily YouTube videos for your family and friends to watch so they can see you safe, enjoying yourselves, and living the Bible in the land of Our Lord. They always relax when they actually see things for what they really are.

Eighth, for those traveling with us — we look forward to seeing you at the airport in Tel Aviv. Don’t forget that this is probably the safest airport in the world and security is excellent — especially now. This may be the safest time of all to visit the Holy Land 🙂 We will begin our pilgrimage in the north — up in Galilee — far removed from the hustle and bustle of Jerusalem. While there we’ll keep our eye on events in the country and we can always adapt as necessary if anything escalates. Have no fear, trust us and look forward to the most amazing of life-changing journeys you’ll ever experience.

Safe in the Holy Land? https://www.youtube.com/watch?v=yq537nLgyGE 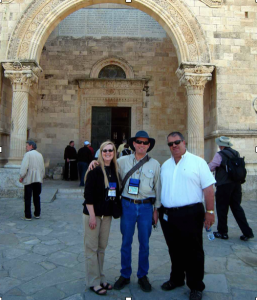 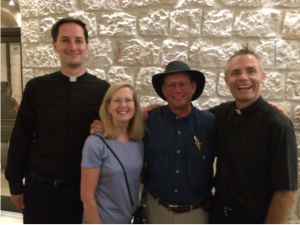 Murders and Crime in Chicago in 2013 per 100,000 population; much safer in Jerusalem

Percentage rates remain about the same today. In other words, it’s safer in Israel than it is in most cities in the United States. 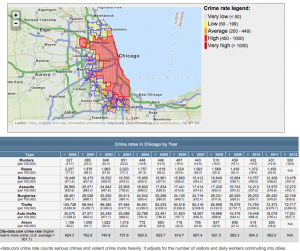 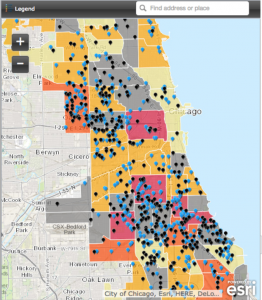