Maria Faustina and the Divine Mercy: A Short Biography & History


Since today we are praying the Divine Mercy at the bones of St. Maria Faustina Kowalska at the convent in Poland, I thought I would share this short biography and history.

An excerpt from Apostle of Divine Mercy, a biography published by the Vatican.

Saint Maria Faustina Kowalska, an apostle of Divine Mercy, one of the most popular and well-known saints of the Church. Through her, the Lord Jesus communicates to the world the great message of God’s mercy and reveals the pattern of Christian perfection based on trust in God and on the attitude of mercy toward one’s neighbors. 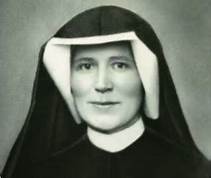 Sister Faustina was born on August 25, 1905 in Glogowiec, Poland of a poor and religious family of peasants, the third of 10 children. She was baptized with the name Helena in the parish church of Swinice Warckie. From a very tender age she stood out because of her love of prayer, work, obedience, and also her sensitivity to the poor.

At the age of seven she had already felt the first stirrings of a religious vocation. Helen made her first Holy Communion at the age of nine, which was very profound moment in her awareness of the presence of the Divine Guest within her soul. She attended school for three years. After finishing school, she wanted to enter the convent, but her parents would not give her permission. Being of age at 16, Helen left home and went to work as a housekeeper in Aleksandrów, Lodi, and Ostrówek in order to find the means of supporting herself and of helping her parents.

Helen joins Sisters of Our Lady of Mercy: Helen never lost her desire for a religious vocation. After being called during a vision of the Suffering Christ, she entered the Congregation of the Sisters of Our Lady of Mercy on August 1, 1925, and took the name Sr. Maria Faustina of the Most Blessed Sacrament. She lived in the Congregation for thirteen years in several religious houses. She spent time at Krakow, Plock and Vilnius, where she worked as a cook, gardener, and porter.

Externally nothing revealed her rich mystical interior life. She zealously performed her tasks and faithfully observed the rule of religious life. She was recollected and at the same time very natural, serene, and full of kindness and disinterested love for her neighbor. Although her life was apparently insignificant, monotonous and dull, she hid within herself an extraordinary union with God.