At the 20219 investiture of new Knights and Dames into the North Central Lieutenancy of the Equestrian Order of the Holy Sepulchre, I was asked to give the keynote talk on Sunday morning with a good number of bishops in attendance and several renowned theologians and radio personalities. 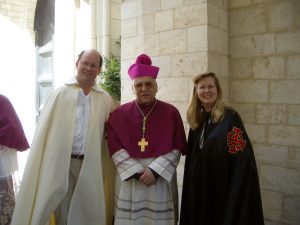 (Photo: Janet and I with Patriarch of Jerusalem Saba at Mass at the Holy Sepulchre in Jerusalem on Easter 2004)

But as the date drew nearer I asked which topic was chosen for me. The Lieutenant of the North Central Lieutenancy informed me, you shall speak on “How can a John Paul II Catholic Survive in a Pope Francis World”.

I was a bit shocked but said I would do it. Having written two books on the Papacy published by Ignatius Press (The Papacy and Upon this Rock) and an on-location document (Peter, Keeper of the Keys) I have a bit of knowledge about the papacy.

The talk was given the morning after I returned home from Israel at 10 PM the night before. I was exhausted and jetlagged but asked God for strength and clarity. Hope you find the talk helpful and encouraging in these strange days in which we live.