Obama Backs Down, Defers to Congress; All Quiet Here in Israel


After Obama’s announcement on Saturday night it appears that all is quiet on the Eastern front.

According to the news Obama is deferring to Congress which will not reconvene until September 9, which is when our pilgrims on this trip will return to the United States.

My guess is by September 9 it will be old news (you know Americans and their memory) and a warning will be given to Syria and it will be left at that. But even if they do send bombs over to Syria the last thing Syria wants is start a war with Israel, which is the most powerful nation in the whole Middle East.

Anyway, this is good news for our pilgrims who now have less apprehension as they arrive in Tel Aviv and embark on this marvelous pilgrimage.

It is also good news for red-faced Obama who will now have less trouble facing Sweden, Russia and the G-20 next week even though he will appear foolish in any case.

Once again Janet and I are glad to be in the Holy Land full of pilgrims and tourists enjoying the most holy place on planet Earth.

Signing off to go to sleep, while listening to German pilgrims singing joyful songs on the shore of Galilee, 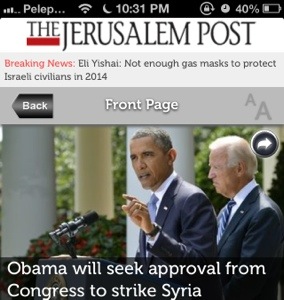 WASHINGTON (AP) – Delaying what had appeared to be an imminent strike, President Barack Obama abruptly announced Saturday he will seek congressional approval before launching any military action meant to punish Syria for its alleged use of chemical weapons in an attack that killed hundreds.

With Navy ships in the Mediterranean Sea ready to strike, Obama said he had decided the United States should take military action, but also determined “our country will be better off” if Congress renders its own opinion.

At the same time, he challenged lawmakers to consider “what message will we send to a dictator” if he is allowed to killed hundreds of children with chemical weapons without suffering any retaliation.

Lawmakers will return to session on Sept. 9.