On this I Agree with Israel's Prime Minister Benjamin Netanyahu 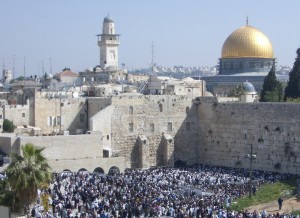 “Over the weekend, Hamas held festivities and demonstrations in Judea and Samaria to mark 25 years since it was founded. With the approval of Mahmud Abbas, they called for the destruction of Israel and the expulsion of Jews from Jerusalem and from every point in the State of Israel. We have been here in Jerusalem , not for 25 years; we have been here in Jerusalem for 3,000 years. We have been in the Land of Israel for close to 4,000 years. We have a strong and steadfast national will, continuous historical consciousness and strength of soul of a people that have struggled for its homeland and know how to maintain its state.

“Last night, I lit the eighth Chanukah candle from the closest possible place to the spot where the miracle of the jar of oil occurred, I actually touched the Western Wall. I said it there and I say it here: The Western Wall is not occupied territory. The Western Wall is ours; it symbolizes the foundation of our existence here for thousands of years. We will stand steadfast in the face of all those who want to expel us from here. The State of Israel, Jerusalem and the Western Wall will remain ours forever.”