“Palestine” – What is the origin and meaning of the word?


I often hear people refer to Jesus as a Palestinian Jew or that the land was called Palestine even back in the times of the Old and New Testaments. But, most people have no idea where the word Palestine came from. The many names of this land through history are fascinating and the title Palestine is very intriguing. People have lived on that narrow strip of land for thousands of years. Were they all Palestinians?

Canaan was the name of the land at the time of Abraham, named after the pagan peoples called Canaanites. Its boundaries were east of the Mediterranean Sea, south of modern-day Lebanon and Syria, and west of modern-day Jordan, with the Jordan River as the border. 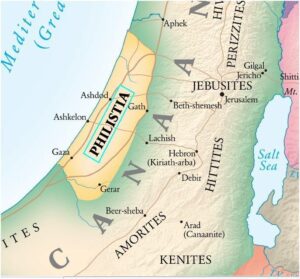 When Joshua conquered the Promised Land, Canaan was renamed Israel. The name Israel was given to Jacob earlier when wrestling with the angel (Gen 32:28). The people living in Israel were called the Israelites, or the children of Israel.

Around 900 BC, the kingdom of Israel split between north and south. The north was called Israel and the south was called Judah. After the Jews returned from exile in Babylon around 400 BC and especially during the time of Christ, the land was roughly divided between Galilee in the north, Samaria of the Samaritans in the middle, and Judea in the south. Jerusalem was in Judea, from which comes the name Jew and Judaism.

A short digression to set the stage. During much of the history described above, there was a narrow strip of land along the Mediterranean Sea called Philistia, the land of the Philistines. Remember Goliath the Philistine? They were the perennial enemies of God’s people Israel. 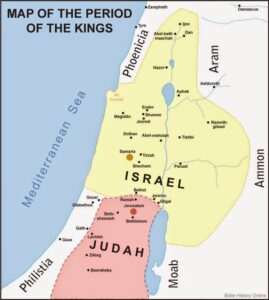 The Encyclopedia Britannia writes, “The word Palestine derives from Philistia. … The name [Philistia of the Philistines] was revived by the Romans in the 2nd century CE in “Syria Palaestina,” designating the southern portion of the province of Syria, and made its way thence into Arabic, where it has been used to describe the region at least since the early Islamic era.” The area was referred to as Palestine (or, land of the Philistines).

The Jewish Encyclopedia explains, “Vespasian officially designated the country as “Palestine” on the coins which he struck after the suppression of the Jewish insurrection in 70 CE., implying thereby the territory of the Jews.”

On the WorldHistory.org website we read, “Emperor Hadrian was so enraged by Jewish resistance that he re-named the province Syria Palaestina (after the two traditional enemies of the Jews, the Syrians and the Philistines) and banished all Jews from the region, building his city Aelia Capitolina on the ruins of Jerusalem.”

In 1948, David Ben-Gurion proclaimed the land as the State of Israel. U.S. President Harry S. Truman approved on the same day.

Not a few refuse to accept the State of Israel and will not use the name. Many now call the land “the Holy Land” not only because it was made holy by the Lord’s presence and actions, but to avoid offending Jews and Palestinians.

Pray for the peace of Jerusalem!

“Palestine”, Singer, Isidore, ed. In The Jewish Encyclopedia: A Descriptive Record of the History, Religion, Literature, and Customs of the Jewish People from the Earliest Times to the Present Day, 12 Volumes. New York; London: Funk & Wagnalls, 1901–1906.