Everyone arrived safely in the DiVinci Airport in Rome. Janet and I met the group with our local Italian escort Luca—who is a real gem. After loading all the luggage on the bus, we drove about one hour to our hotel which is less than a 10-minute walk from St. Peter’s. When we choose a hotel for a pilgrimage group it’s all about location, location, location—along with cleanliness and comfort.

We got our rooms, ate lunch at our favorite restaurant and took off for an introduction to Rome—Crossing the Tiber River and Mass at St. Peters.

The first time I put on my running shoes, went to the other side of the Tiber River and then jogged across the Tiber River on the Bridge of the Angels. Huge angels line the bridge each carrying an implement of Jesus’ torture: one with the cross, another with the whips, others with the nail, the crown of thorns, the lance, etc. As I got to the end of the bridge I could see St. Peter’s on my left, down the long Via Conciliacione. I like to think the road refers to the way of reconciliation.

At the end of the road I ran across the large area for parking and taxis. I stopped to look through the colonnades of St. Peter’s Square (really a circle) to the front of the church. I saw the arms of the colonnade reaching out to welcome and embrace me as I approached the church. Atop the colonnades are the statues of over a hundred saints rejoicing at my entrance.

On my left and right were huge gushing fountains to remind of our need for baptism and cleansing before entering the house of the Lord. In the center of the square is an ancient Egyptian obelisk. Some have said it proves the Catholic Church is pagan, but no, it proves that the Catholic Church conquers over paganism—on the tip of the obelisk is a cross.

If there had been a video camera at the top of the obelisk it would have recorded the span of salvation history. It once stood in Hieliopolis Egypt. Abraham passed this on his way back and forth from Egypt, Moses led the children of Israel past this obelisk. The Holy Family probably saw it on their journey to Egypt. It was then moved to Rome by Nero who placed it in the center of his circus. Under its shadow Peter was crucified head down and after Christianity became the legal religion of the state, it was moved from Nero’s Circus to the center of St. Peter’s Square to proclaim that the Gospel outlasts, conquers and redeems paganism.

Then we turn our eyes to the huge statues of Peter with the keys on the left and Paul with sword and Scriptures on the right. These two princes of the Apostles stood boldly to greet me as I came into the House of God. Atop the façade Jesus with John the Baptist and the Apostles welcomed me. Inside the great bronze doors are the holy water fonts with angels, the Pieta by Michelangelo, the statue of Peter blessing the travelers. I have just entered St. Peter’s Basilica—the largest church in the world—and it is awe-inspiring. It can still take my breath away. I ran slowly to the front, to the Chapel of the Chair of Peter. 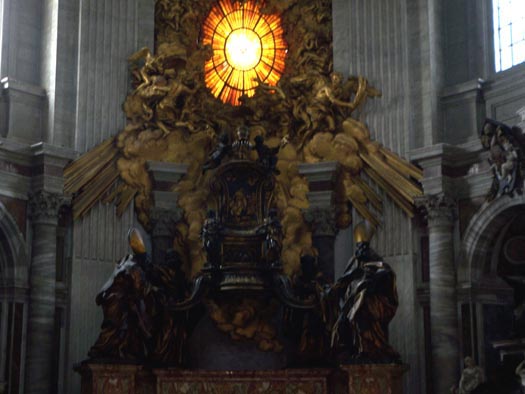 The chair is suspended against the front wall of the apse. Above is the Holy Spirit window with a dove in the center and twelve radiation golden sections. The dove represents the Holy Spirit which floods the church with light radiated out through the teaching of the Twelve Apostles. The chair is flooded with its light as angels rejoice all around intermingled with golden rays.

Below the chair are the four early doctors of the Church looking up to the chair. Two are from the East: St. John Chrysostom and St. Athanasius. Two are from the West: St. Ambrose and St. Augustine. They do not hold up the chair but merely acknowledge and look to the chair. This is  not the Official Chair of the Pope since the Cathedral of Rome (and of the world) is St. John Lateran Church a few miles away, but tradition claims that the chair in front of St. Peter’s is a reliquary in which are pieces from the original chair of Peter from 2,000 years ago.

I am home! With running shoes I fell to the floor in front of the church and wept for a long time. I thanked God for bringing me home to the fullness of the faith in the Catholic Church.

We take our Pilgrims along the same way
So, this is the first thing we did with our pilgrims. I wanted them to experience and understand the beauty and profound importance of this place. Even though they were tired from a long journey we started out at the heart of the story Rome has to tell.

We then joined the German Mass with 1,300 German teenagers in the front of St. Peter’s—right under the chair and the Holy Spirit window. With pipe organs and choir we all rejoiced and celebrated Mass above the bones of St. Peter down below. More on this later.

We then walked a short five minutes back toward our Michelangelo Hotel stopping at our favorite restaurant again—La Pilotta da Mario. Janet and I have eaten at this restaurant at least 100 times and our recommendation and picture is on their wall. Mario even takes Janet into the kitchen and teaches her how to make our favorite dishes. We had a delicious Italian dinner with Max and Mario.

We had a delightful and delicious dinner of Bruschetta, Eggplant Parmagiana, Tortellini Pesto, Ensalada Verde (green salad), Veal Saltimbocca, and for desert—Tiramisu.

Now that w have kept the pilgrims up until their normal bedtime—trying to get them back on a schedule to overcome jetlag more quickly—we all crashed into bed!