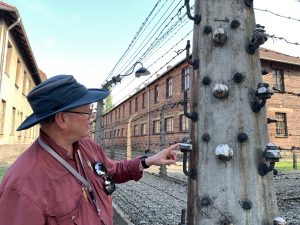 This morning we had a later start than earlier days and everyone appreciated that. We boarded the bus and went to St. Stanislaw on the Rock Church for our Mass (homily here). Then we had a 1 1/2 hour drive to Auschwitz. Along the way we prayed and watched a movie and prepared for this gut-wrenching tour.

No one is prepared for what they see there even though it is sanitized compared to what it was like during the holocaust. But Americans need to know and see and remember. There’s a saying that those who are ignorant of history are doomed to repeat it. In fact, we are repeating it by the slaughter of millions of unborn babies.

We toured both Auschwitz and Birkenau and visited the underground bunker in the cell where St. Maximilian Kolbe gave his life through starvation as a substitute for a married family man. We talked a lot about that today about what true Christianity really is. Al Kresta gave a talk on his thoughts on Auschwitz (see below).