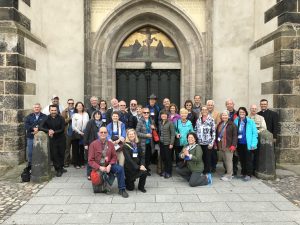 Leaving Berlin we drove to Potsdam to tour the palace and gardens of King Frederick the Great though we concluded that in the culture wars he was more our adversary than a friend.

Wittenburg was an amazing though sad visit since this is where Martin Luther nailed the 95 Theses to the Wittenburg Door which started the Protestant Devolution.

Join us as we tour the city, see his Tomb, leave him 500 Reasons to Be Catholic and celebrate Mass in the only Catholic Church there. You can watch another excellent homily here.