Radio Shows then Taking to the Air 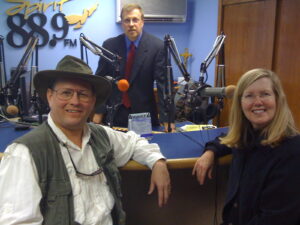 I will be on Relevant Radio at 12:00 noon Eastern time to discuss St. Joseph with Fr. Richard Simon. Then I will be recording a show on Baptists and Conversion with Steve Wood of www.Dads.org which airs on EWTN this Thursday at noon.

(Who is the fat man in the picture? I don’t recognize him anymore! Picture of Janet and I in the KVSS studios with Jim Carroll who worked with us to organize this pilgrimage. I look different in the picture since I was 30 pounds heavier then! Janet was 15 pounds heavier!)

Then Janet and I board the big silver bird to fly through Amsterdam to Tel Aviv where we will stay a few days in Nazareth — catching up from jetlag, running in new areas, meeting friends and exploring new places. We meet our group of 70 pilgrims at the airport on Sunday.

Two groups are joining us — KVSS Spirit Radio out of Omaha Nebraska and Catholic Scripture Studies International. I will be posting daily YouTube videos right here on my blog so you can join us on a Virtual Pilgrimage each day.