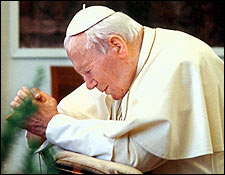 One Day John Paul II returned ill from the hospital and his attendants were told he was to stay in bed for several days. In the morning they came to his room and found him missing — he was not in his bed.

They searched the apartment and found the Pope deep in prayer in the chapel. They said, “Holy Father, the doctors ordered you to stay in bed. We are  concerned for Your Holiness.”

The Pope responded, “I too am concerned for my holiness!”

And this is the kind of thing that made John Paul the Great a Saint.