Running thru the Life of St. Francis 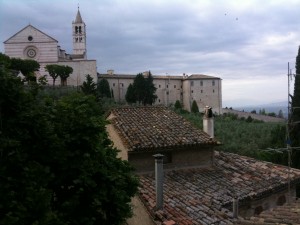 On your mark, get set — GO! I set the alarm for early to run the route I would be leading our pilgrims through Assisi and to get a four-mile run in before the rest of the group got up. I wanted to cover four miles and did a bit more.

Assisi is one of the most beautiful cities in the world. Medieval with gates, stone walls, banners, flowers, churches, a fortress and tile roofs. It is quaint and stunning — candy for the eyes.

I ran through the life of St. Frances — his birthplace, his family home, the “prison” where his father constrained him. I also ran to the church named after him and past his tomb. “No fotos, no fotos!” but in the morning it is always allowed, since no one is there to yell at you.

Down the valley is the Church of San Damiano where the “St. Damiano Crucifix” spoke to Francis and said, “My church is falling into ruin. Repair my church.” Francis thought he meant the little porziuncola in the valley. He realized later that God meant his universal Church. These sites are all within hiking distance in Assisi.