St. Maximilian Kolbe and his “City of the Immaculata” Bio and History

Today we are in Niepokalanow where St. Maximilian Kolbe set up the “City of the Immaculata” and helped save Poland’s faith as it was about to descend into the tyranny of the Nazis and the Soviets. Today their Catholic Faith is exemplary. So, I thought I would share the story with you while we are there!

Click here for the whole story with lots of pictures….

The History of Niepokalanow: 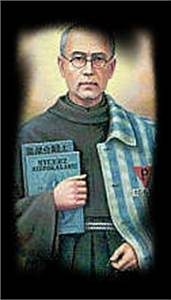 Here, not far from Warsaw, is the Franciscan Friary founded by Saint Maximilian Kolbe. It was begun at a time when anti-Catholic rhetoric was at its height, leading up to the Communist revolution in Russia in 1917. Saint Maximilian decided to fight back, and on October 16, 1917 he and six others formed a group calling themselves the Knights of the Immaculata. His goal was to form a place in honor of the Immaculate Virgin. Obtaining land from Prince Jan Drucki-Lubecki, he was able to construct the monastery and it was consecrated on December 7, 1927.

Although Saint Maximilian was absent through much of this time, traveling to missions in Japan, he was able to help oversee its development. It grew rapidly up to the outbreak of World War II in 1939, having a large printing operation (publishing a daily Catholic newspaper), a radio station, as well as a seminary.

Saint Maximilian returned from time to time, and finally in 1936 he came back to serve as the spiritual father of Niepokalanow. As mentioned earlier, the German invasion of 1939 brought an end to all this: the priory was sacked and Father Kolbe, along with 40 priests, was arrested and held in detention. They were released a few months later, but the Gestapo kept close watch on Father Kobe and  his printing operation. On February 7, 1941, Father Kolbe was again arrested and charged with aiding the Jews as well as the Polish underground. He was held in Warsaw for three months before being transferred to Auschwitz, where he gave up his life for a fellow prisoner…

Click here for the whole story with lots of pictures….