Today we are touring Ephesus and I am showing the tour group my favorite  things in this ancient city. We filmed here for our Paul and Mary DVDs and have brought groups here on numerous occasions.

One of my favorite things to show people in Ephesus is the Billboard for the Brothel that is carved into a large stone on the main road. Every man getting off the ships in the harbor, would see this advertisement. Of course it is well worn with age after 2000 years, but it is still clear enough to “read.” 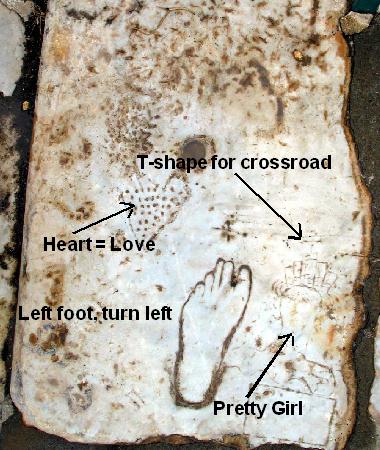 Men looked for these kind of ads when they arrived in a new city. Where are the prostitutes? Sure enough this billboard carved in the stone gave them directions. If you want the love (heart shape) of a pretty girl (image of pretty girl) turn left (left foot) at the next crossroad (T-shape). Sure enough, archaeologists found a two-story brothel up the road to the left. It was even connected by an underground tunnel to the library.

(If you want to visit Ephesus with me next March on our Footprints of St. Paul Cruise, click here for more info.)