The Pope, the Word of God & The Holy Land

The Word of God and the Holy Land, which is the Fifth Gospel

In Pope Benedict XVI’s Apostolic Exhortation “Verbum Domini” he speaks eloquently about the “The Word of God and the Holy Land.” 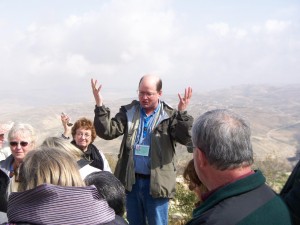 The Pope writes in paragraph 89: “As we call to mind the Word of God who became flesh in the womb of Mary of Nazareth, our heart now turns to the land where the mystery of our salvation was accomplished, and from which the word of God spread to the ends of the earth. By the power of the Holy Spirit, the Word became flesh in a specific time and place, in a strip of land on the edges of the Roman Empire.

The more we appreciate the universality and the uniqueness of Christ’s person, the more we look with gratitude to that land where Jesus was born, where he lived and where he gave his life for us.

“The stones on which our Redeemer walked are still charged with his memory and continue to ‘cry out’ the Good News.

For this reason, the Synod Fathers recalled the felicitous phrase that speaks of the Holy Land as ‘the Fifth Gospel.’ How important it is that in those places there be Christian communities, notwithstanding any number of hardships!

The Synod of Bishops expressed profound closeness to all those Christians who dwell in the land of Jesus and bear witness to their faith in the Risen One. Christians there are called to serve not only as ‘a beacon of faith for the universal Church, but also as a leaven of harmony, wisdom, and equilibrium in the life of a society which traditionally has been, and continues to be, pluralistic, multi-ethnic and multi-religious.’

“The Holy Land today remains a goal of pilgrimage for the Christian people, a place of prayer and penance, as was testified to in antiquity by authors like Saint Jerome.

The more we turn our eyes and our hearts to the earthly Jerusalem, the more will our yearning be kindled for the heavenly Jerusalem, the true goal of every pilgrimage, along with our eager desire that the name of Jesus, the one name which brings salvation, may be acknowledged by all (cf. Acts 4:12).”

To join us in February, a perfect time of year when it is cooler and there are no crowds, visit www.SteveGoes.com.