The Story of Oberammergau – Join us in June or August 2022


Oberammergau: The Passion of a Vow
Michele Malia McAloon

In 1633, halfway into the brutal conflict between Protestants and Catholics known as the Thirty Years War, a small Bavarian village made a plea for God’s mercy and protection against a raging pandemic. To keep the deadly virus at bay, the mountain-encircled Catholic community of Oberammergau carefully restricted access to their town from marauding soldiers and strangers. All was well, until a homesick villager snuck back home under the cover of darkness, bringing the dreaded pestilence.

Soon afterwards, eighty-four villagers succumbed to the disease. In desperation – and in abiding faith – the villagers gathered at the parish church and made a simple vow to God: if no more lives were lost, they would reenact, every ten years, the Passion of Christ. God answered their prayers. According to local lore, no more villagers were stricken by the plague.

The people of Oberammergau have continued to fulfill their vow for more than 375 years, evolving from a simple parish play to a UNESCO designated event. The commitment to the vow still stands at the heart of the Oberammergau passion play.

That vow has shaped a community in ways that would have been unfathomable to those who first made the oath. For the first 200 years, the play was a simple parish event held over a couple of days in the cemetery adjacent to the town church. By the 1800s, this quaint village play began to attract pilgrims culminating in 2010 when more than 500,000 people attended daily performances between May and October.

In a five-hour production that might be the envy of Broadway producers, the story of Jesus of Nazareth is presented from His entry into Jerusalem to His Resurrection. Throughout the performance, there is spoken dramatic text, with instrumental and choral accompaniment. Scenes designed to illustrate the interrelationship between the Old and New Testaments, in a typology foretelling the life of Christ, are presented throughout the play by silent actors acting out Biblical stories. 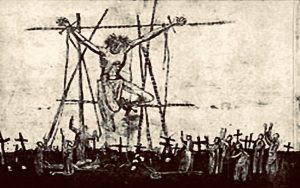 Christian Steuckl, a native of Oberammergau and the director since 1990, may offer some insight into the world’s fascination with the play. According to Steuckl, any dramatic portrayal of the Passion (the last five days prior to Christ’s crucifixion) attempts to answer Christ’s question: “Who do you think I am?” For almost four centuries, the reenactment has tried to answer the question posed to the Apostles and to every generation since.

Despite the worldwide popularity of the Passion play, it is still a completely local, community-based event. All who participate, from the actors who portray Jesus to the persons who tend the live animals, must be born in Oberammergau, or residents of Oberammergau for more than twenty years, or married to someone from Oberammergau (and have resided in the town for at least ten years).

Every aspect of the play is a hometown product: the costumes, the text, the lighting, and all the technical aspects; even the donkey upon which Christ rides into Jerusalem is from a local farm. Over 2400 of the 5000 citizens of Oberammergau are directly involved in the play.

Casting for the postponed 2020 production – and now for 2022 – created great furor in the world press since the next performance will include two Muslim men. Both are native to Oberammergau. Every role is double cast, of course. Judas will be played by Martin Schuster and Cengiz Gorur, an 18-year-old practicing Muslim. Abdullah Karaca, another Muslim, will be one of the two people playing the key role of Nicodemus. 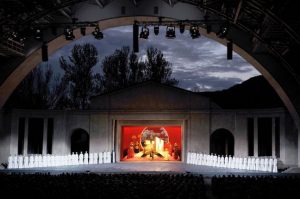 Steuckl’s decision to cast these men along with Protestants and even atheists only makes sense in light of the question: “Who do you think I am?” Christ posed this question to all of humanity and all persons, regardless of creed, are called to answer this question.

During this year’s Ash Wednesday press conference, the simple humility and towering grandeur of the town’s vow was on living display. A two-hundred-year-old tradition dictates men and women begin growing their hair fifteen months prior to play season. The young mayor of Oberammergau, Andreas Rodl, himself a member of the play’s choir, decreed all those in the play, both men and women, are not to cut their hair or men to shave their beards until the end of 2022.

Christian Steuckl, the director, has joked that, every ten years, Oberammergau begins to look like a colony of hippies. There was a poignant reminder of how, in every decade, the reality of the times creeps into the play when the mayor counseled the male actors not to allow beard growth to get in the way of properly wearing the pandemic mask.

What began in the midst of plague has continued to be affected by plague: seasonal performances have been canceled twice due to the threat of disease. In 1920, when Germany was impoverished by World War I and in the midst of the ravages of Spanish flu, the play was postponed to 1922. The 2020 season was canceled due to COVID-19 and will open May 14, 2022.

Frederick Mayet, one of the two actors who portrayed Jesus in the 2010 production and will repeat the same role in 2022. He is also head of the Passion play’s press relations, a striking man with light, penetrating blue eyes and reddish-blonde hair. It’s easy to detect the sublime sense of deep responsibility that Mr. Mayet feels in portraying the Son of God. He said the most difficult parts for him as an actor are Christ’s night in the Garden of Gethsemane and the physicality of the Crucifixion. For more than twenty minutes, the actor portraying Christ is harnessed to the Cross, outstretched arms supported by hooks.

Steuckl has described how fulfilling the vow has shaped his whole life. Both his father and grandfather played the role of Caiaphas. Mr. Steuckl remarked, jokingly, that sometimes he feels he was raised by Caiaphas. Early in his life, he set a goal to become the play’s director, although at one point he considered entering a seminary. Under his leadership, there have been many innovations. bringing a fresh light to Christ’s message of the Kingdom of God. Beneath Mr. Steuckl’s movie-star looks and easygoing jocularity lies a heartfelt dedication to portray how Christ’s mission of love is still valid today.

Over the centuries, the Passion Play has never been without controversy. From the decision to move the performance out of the church to the cemetery, to casting a married woman to portray the Virgin Mary, to Church-versus-town disputes over who controls the text – and, in recent decades, charges of antisemitism.

A retired American expat, who will attend his fifth seasonal performance in 2022, described the Oberammergau Passion Play as a microcosm, where all of human folly and wisdom come together, not unlike the drama that took place at the foot of the Cross. On the immense stage in Oberammergau, a cock’s crowing can be heard on a nearby farm – a visceral reminder of how fulfilling vows and commitments out of love for God and neighbor, in an imperfect world, from St Peter’s day to our own, may be a step toward eternity.