The two men of the hour!

Janet and I arrived a few days early in Rome before our group. There will be 63 pilgrims arriving on Friday. We like to make sure everything is in order and ready for their arrival. And it is! 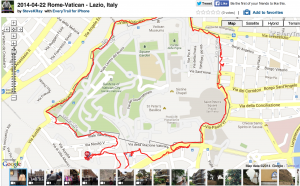 We decided to take a walk around the walls of the Vatican and get a feel for what’s happening in the city a few days before the canonization. So I thought I’d share with you so you could get a feel for being here in Rome. Hope you enjoy it 🙂

ROME, April 23, 2014 (Zenit.org) – Up to a million pilgrims will be attending the canonisation Mass of Blessed Popes John XXIII and John Paul II on Sunday, the city and Vicariate of Rome predict.

Maurizio Pucci, chief coordinator of special projects for the Mayor of Rome, told reporters Wednesday that the city estimates a minimum of 500,000 pilgrims and a maximum of a million to join the canonisation celebrations. However, some foresee a far higher number, possibly even seven million.

Pucci said 1,700 coaches, 58 chartered planes and five trains are bringing pilgrims from Poland alone. He said a problem is that the number of reservations is difficult to predict because unlike previous times, many groups are coming independent of their dioceses.

Both the city of Rome and event sponsors are sharing the costs of the event and an enormous amount of manpower will be on hand.

This will include 2,500 civil protection volunteers, 4,400 police and security personnel from the city of Rome and the Italian state, and several hundred medical staff. 5,000 priests, several hundred seminarians and deacons will help administer holy communion, and hundreds of volunteers will act as welcomers.

The Vicariate of Rome has prepared a number of prayer vigils in different churches on the night of April 26th, some geared to particular language groups.