Walking thru Jesus' 1st Century Jerusalem; Renewal of Baptismal Vows in the Muddy Jordan; Floating in the Dead Sea, Camel Rides and more


(Keep the humor and comments coming below. Everyone loves it when I read them on the bus!)

Of all the days on our pilgrimages, today tends to be the fun day. Camel rides, floating in the Dead Sea, visiting the Jordan River where Jesus was actually baptized and loads of fun and laughter along the way.

The day began with a tour of the Temple Model that is like walking through the city of Jerusalem in the time of Christ. It is a model built to scale. We also see the Dead Sea Scrolls while at the Israel Museum. 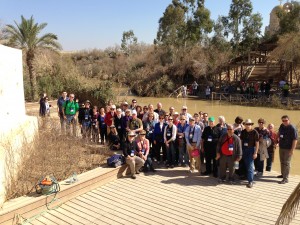 Group picture at the Jordan River

Here we renewed our baptismal vows at the authentic site where Jesus was actually baptized. The river was swollen from the recent rains but it was beautiful — a favorite site for many of the people. If you threw a stone across the river it would land in the country of Jordan.

Lunch in Jericho is always a treat and only the second time our group goes shopping and that is only because there is a unique shop attached to our restaurant. There are a lot of biblical things to discuss in Jericho including some important events in the life of Our Lord.

Qumran, the Essenes, the Dead Sea Scrolls, monastic life, John the Baptist. All of that comes together in Qumran located in the Judean Wilderness near the northern tip of the Dead Sea, only a few miles from the location Jesus was baptized. 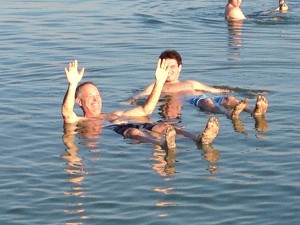 Floating in the Dead Sea

The Dead Sea swim, err, you really can’t say that because it is really just a float. But most of the people get right in and float around on their backs. It is a bizarre sensation.

The highlight of the day — which you can tell by the howls of laughter and squeals of delight is the camel rides. Everyone takes their turn and we get great pictures and videos.