Was Jesus Really Born at THAT Place in Bethlehem? 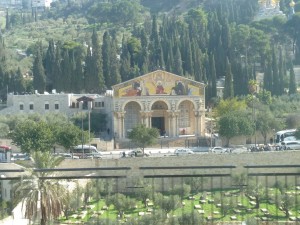 Church of the Agony in Gethsemane

Today we are having Mass at Gethsemane on the western slope of the Mount of Olives. How do we know this is really Gethsemane?

And yesterday we had Mass at Tomb of Christ in the Church of the Holy Sepulchre. Really? How do we know?

Two days ago we venerated the place Jesus was born in Bethlehem and had Mass in the Cave of the Shepherds.

It is often asked: how do we know these are the real sites where Jesus and Mary lived and walked. The earliest Christians realized the importance of these sites and immediately viewed them as sites to be remembered and venerated. Small chapels were built and pilgrims came from around the world to visit these spots and to pray. 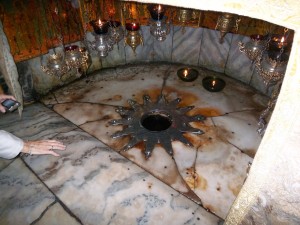 The spot marking the place where Jesus was bornthese spots and to pray.

When Christianity became legalized, churches were built on these sites. Tradition, archaeology and the ancient witness confirms the authenticity of the sites. Below is a few examples relating to Bethlehem.

In a very enlightening side note, Bethlehem was mentioned by St. John Chrysostom in his Commentary on the Gospel of Matthew, written in ad 370: “. . . Since that birth [of Jesus], men come from the ends of the earth to see the manger, and the site of the shed.”

The early Christians remembered and preserved the location and pilgrims like you visited even in the first centuries. Emperor Hadrian built pagan shrines over the holy places in 135 AD. He thought the memory of the sites and associated faith would be obliterated forever. But then Emperor Constantine legalized Christianity. His mother St. Queen Helena went to Israel, asked the locals where Jesus was born, where he was crucified… 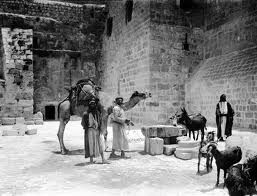 Church of Nativity 100 years ago

They pointed to the shrines and showed her what they all still remembered well. Queen Helena knocked down the pagan shrines and what did she find? The remains of early Christian veneration. She built a huge church over the place of Jesus’ crucifixion and resurrection, another over the place of Jesus’ birth in Bethlehem and a large church over the cave on the Mount of Olives where Jesus ascended into heaven.

There is a saying, “The water is cooler and clearer the nearer you get to the source.” Many of the Fathers of the Church – very close to the events mentioned in the Bible – speak with great certainty about the sites in the Holy Land.

The International Standard Bible Encyclopedia says, “The cave-stable is mentioned by Justin Martyr, Origen, and Jerome. After the Romans conquered Bethlehem anew (AD 135) the site of the Nativity was desecrated, probably under Hadrian (117–138; cf. Jerome Epistle 58.3). Jerome lived for thirty-three years in Bethlehem (AD 387–420). Here he helped found and direct pilgrim hospices, convents for women, and a monastery.”

The Tyndale Bible Dictionary says, “The birth of Jesus possibly took place in a cave in the rocks outside the town. The early Christian writer Justin Martyr 9100–165) thought so, as did Origen (c. 185–254) some years later. Origen frequently resided in the Holy Land and wrote, ‘In Bethlehem you are shown the cave where he was born, and within the cave the manger where he was wrapped in swaddling clothes.’

“Jerome later described the grotto over which the Emperor Constantine had built a basilica. In excavations in 1934–35, evidence indicated a second period of building in the reign of Justinian (ad 527–565), when Constantine’s basilica was extended beyond its original proportions. Steps lead down to the grotto, the rectangular shape of which suggests that Constantine’s builders reshaped the original. But there is no description of the grotto prior to the construction of Constantine’s basilica.”

These places were remembered! We’ve known their locations for two thousand years.

Another Example: The Cave of Machpelah

The Cave of Machpelah was bought by Abraham about 1850 BC as a tomb in which to bury his wife Sarah. It now contains the remains of Abraham and Sarah, Isaac and Rebecca, Jacob and Leah. It is now in Hebron, the city of Abraham. However, Abraham never owned any other land in Canaan before he died. 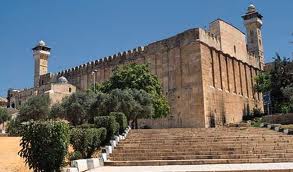 The Machpelah Cave over Sarah's tomb built 2,000 years ago

Abraham’s descendants were in bondage in Egypt for four hundred years. For an additional forty years they wandered in the wilderness. It was remembered in Genesis 49 – over 400 years later – when the Israelites returned from Egypt. The city of Hebron was built around Abraham’s tomb and King Herod build a huge monument over the graves of Abraham and his family which still stands today in the heart of Hebron.

Notice a case in which we can see how important holy sites were and how they were carefully remembered. The Tomb of Rachel can be visited today in Bethlehem even though she was buried there about 3,800 years ago! 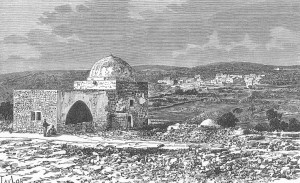 Rachel's Tomb 100 years ago in Bethlehem

Jacob buried Rachel in Bethlehem and the location of the tomb was still known 800 years later when Israel returned from Egypt and after they lived in the land for over 350 years. Wouldn’t expect them to forgot its location over the subsequent eight hundred centuries? It is still there today and we filmed there for our David DVD. Notice the biblical verses below:

“And Jacob set up a pillar upon her grave; it is the pillar of Rachel’s tomb, which is there to this day” (Genesis 35:20)

Eight Hundred years later, “[Samuel said to Saul]  When you depart from me today you will meet two men by Rachel’s tomb in the territory of Benjamin at Zelzah” (1 Samuel 10:2).

These are just a few examples from the Old Testament to show how these holy sites were venerated and remembered. The same can be said from the New Testament. Holy people have always remembered the holy sites.

How much more so for Jesus the Son of God who became flesh! We can be very confident that the holy sites we see today, were the holy sites of old—the very places where God and the saints walked and where we can walk today.

Join us on a pilgrimage to the Holy Land and I will be your guide. Visit Footprints of God Pilgrimages.