Why Can't Catholics Celebrate Mass where the First Mass was Celebrated – in the Upper Room? 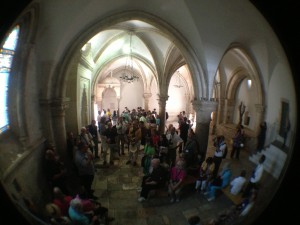 Fish-eye view of the Upper Rome with our pilgrims

Deputy Foreign Minister Zeev Elkin dismisses reports that Israel is planning to hand over control of the Tomb of King David to the Vatican.

See Steve Ray’s comments at the end of the article

Deputy Foreign Minister Zeev Elkin (Likud) on Wednesday dismissed recent reports that Israel is planning to hand over control of the Tomb of King David to the Vatican.

Responding to a question by MK Yaakov Litzman (United Torah Judaism), Elkin said that the Foreign Ministry has not signed nor does it intend to sign any agreement transferring all or parts of the tomb.

The Tomb of King David, located on Mount Zion in Jerusalem, is also home to a church, which claims ownership of the site, more specifically of a room in the compound in which the Catholic Church claims the “Last Supper” occurred.

Several years ago, Jewish groups attempted to carry out improvements to the building, setting off protests from church leaders. More recently, the church requested permission from Israel to build a passageway through the Diaspora Yeshiva in order to enable visitors to more easily access a Christian site on the Mount. 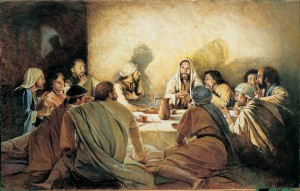 Reclining in the Upper Room for the First Eucharist

Elkin said that there is a longstanding economic agreement between the Vatican and Israel. This agreement relates to taxes, fees, and individual claims on Vatican property and while there have been demands to include the “Last Supper” room as part of it, the Foreign Ministry has made it clear that control of the site will not be handed to the Vatican whatsoever.

Elkin added that he is unaware of any offer, not even on the part of the Vatican, to receive control of King David’s Tomb in exchange for lands owned by the Vatican around the Kinneret. Rumors of such an offer have recently appeared in hareidi-religious publications.

“Every detail regarding the Last Supper room was agreed upon in coordination with the Ministry of the Interior, and since then the subject has not been opened for discussion with the Vatican,” said Elkin.

Steve’s Note: As much as I support Israel, matters like this infuriate me. Christians around the world should demand that Israel practice religious freedom and do the right thing – give the Upper Room back to its rightful owners, the Franciscans, and again allow Catholics to celebrate Mass where Jesus instituted the Eucharist, the priesthood, confession and where the Holy Spirit came down on Pentecost. We should put ever amount of pressure possible on Israel to change their stubborn minds on this matter.

Regarding the Tomb of David: The tomb of David on Mount Zion is not the real tomb, but a ceremonial tomb. David was buried down the hill near the Ophel Ridge in the remains of the original city of David. For info on the real place of David’s burial, click HERE for my study on this.