Why Our Pilgrimages Sell Out Months in Advance 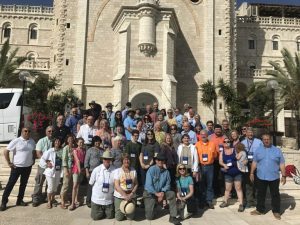 I must tell you dear Elizabeth, Steve Ray’s Holy Land trip was even better than I could have imagined. It could not have been done better!

First, let’s start with the preparation. All the materials sent in advance, the preparations — all functioned flawlessly. I wrote to you about this in a previous email. From the start, we were treated like royalty and it never stopped.

From my experience, Amer was the man-on-the-ground whose job it was to make sure everything happened, and it happened on time without a hitch. If that man or any member of his family showed up in the LA area, I’d take off work if necessary, travel to wherever he was and take him and his travel companions out to a great dinner at a fancy restaurant in an attempt to return the favor for his unbridled hospitality. Wow was he great! A storehouse of knowledge with an intimate connection to the land.

And Stephen and Janet Ray. Where do I start? Steve’s done this so often and so well, he makes the complex seem effortless. Janet made sure we didn’t get lost or separated from the pack. With all the contacts that he and Amer have, we were able to do things that few could do. How many of the pilgrims get to celebrate Latin High Chant Mass at the Tomb in the Church of the Holy Sepulchre for 50. Breathtaking. The experience of a lifetime.

And the people from the Food Donation Connection. They were so friendly and pious.

My wife Merle and I will never be the same. I’ve told all my friends about this trip and told them explicitly “You should go”.

So thank you Elizabeth. Thank you Amer and your family, Thank you Steve and Janet Ray. Thank you Bill and Sue for all that you’ve done for Merle and I.

I hear there are plans for a Part II trip in February of 2020. I told Bill — count Merle and I in.