Wow, did everyone look better today after a good night’s sleep in Galilee!


After arriving in Tel Aviv and spending the first night in Tiberias, the group sure looked more refreshed and ready to go this morning. 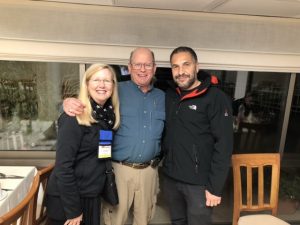 We took off for Mass at the Mount of Beatitudes (homily here) before heading north to the upper tip of Israel, driving along the border with Lebanon. We went to Caesarea Philippi, which is today called Banias, and I gave my talk there “Peter: The Rock, the Keys and the Chair.”

We had a great down home and locally authentic meal at a Druze Restaurant. From there we drove back down to the Sea of Gallilee to spend time at Tabgha, where Jesus multiplied the loaves and fish and then to the Church of The Primacy of Peter where I gave one of my favorite talks on St. John Chapter 21. Free time back at the hotel, another great Ron Beach dinner and going to bed early.

The mayor of Tiberias stopped by for dinner and we had a nice chat. Above is a picture of Janet and I after our discussion with the mayor.