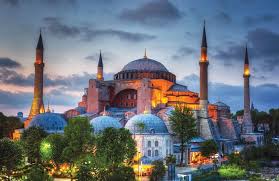 Sad news indeed, but certainly expected. Turkey has no desire to open itself to the world nor do they have a clue what to do with their national treasures. The only goal of the new despot Erdogan is to re-establish the old Muslim Ottoman Empire.

For 1,000 years the massive Hagia Sophia was the largest church in the world and people thought the dome was held up by a miracle of God. But after 1,000 years as a church, the Muslims conquered it, painted over the gorgeous mosaics and defaced all the Christian symbols. They turned it into a mosque. 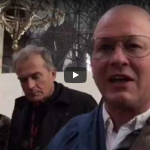 We have been in the Hagia Sophia many times (watch one of our videos inside the church; actual video inside church starts at 4:52) and my imagination takes me back to what it must have been like for the pig farmer up to his knees in pig excrement who arrives on Easter Vigil for Mass!! The smells, the bells, the music, the ambiance, the truth preached–the glory of it all. He must have thought he’d died and gone to heaven. No wonder pagans were rushing to be Christians.
Here is a beautiful experiment to demonstrate what it might have sounded like. https://www.npr.org/2020/02/22/808404928/listen-the-sound-of-the-hagia-sophia-more-than-500-years-ago
And, listen here:
After the national hero Ataturk (now discarded by the Muslim resurgence) the church was changed from a mosque to a museum. It was the No. 1 tourist attraction in Turkey. On our pilgrimages, we could imagine and sense its former glory as a church. But now Erdogan has turned it back into a functioning mosque. 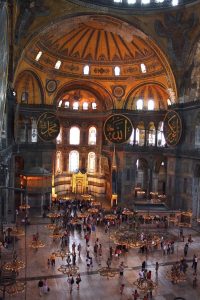 Imagine if Christians took a huge iconic mosque and turned it into a church. The international outrage would be deafening. Why the silence here? How sad.
If you want you to understand what happened in Turkey read my article “Prepare for the Skyline of the Future” which is a warning to the West. Constantinople, renamed Istanbul, was the capital of the Byzantine Christian Empire. It was all Christian and the Hagia Sophia was its cathedral. but now Turkey is 99.9% Muslim with less than 60,000 Christians in a country exceeding 80 million people.
If you don’t think this can happen to the West, think again.